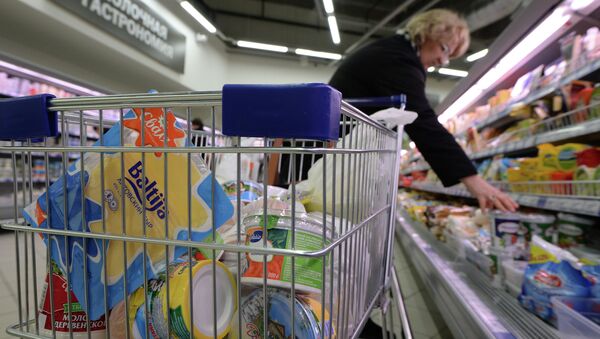 © Sputnik / Maksim Blinov
/
Go to the mediabank
Subscribe
International
India
Africa
Moscow is not planning to cancel the embargo on food products from the countries that imposed sanctions on Russia.

"We are not planning to cancel the food embargo so far," Dvorkovich said.

Russian authorities are discussing the reduction of import duties for a number of products from food embargo list from the countries that did not impose sanctions on Russia, Arkady Dvorkovich added.

"There is a general idea of the FAS [Russian Federal Antimonopoly Service], currently there are formal procedures of discussions on this issue," Dvorkovich said answering the question about import duties cut.

Last year, the United States, the European Union and their allies imposed several rounds of sanctions on Russia for its alleged involvement in Ukrainian conflict. In retaliation, Moscow introduced a one-year embargo on certain food products from the countries.

The European Union has lost about $24 billion as for beginning of February because of Russian ban for meat, fish, fruit, vegetable and dairy products, according to Spanish Foreign Minister Jose Manuel Garcia-Margallo.