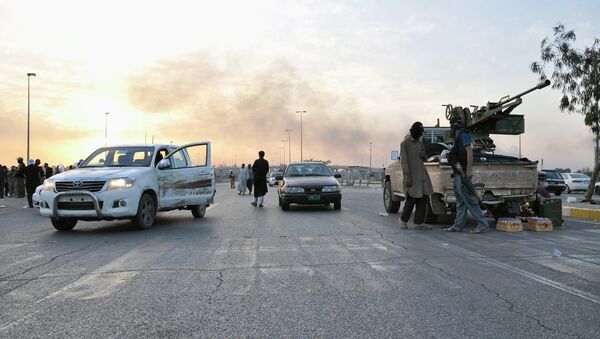 © REUTERS / Stringer
Subscribe
International
India
Africa
US-led coalition airstrikes are weakening the Islamic State in Iraq, so the extremists are likely to move their positions to neighboring areas, including Lebanon.

Islamic State Begins Executing Christians Kidnapped Earlier in Syria
MOSCOW (Sputnik) – The Lebanese army is conducting military operations in the country in order to prevent Islamic State terrorists from spreading and destroying local villages, particularly those of religious minorities, such as Christians, members of the Lebanese parliament have told Sputnik.

"The military operation in Ras Baalbek is aimed at preventing terror groups in the mountains from reaching some villages and to some military positions. There was a possibility that terrorists reach some villages and threat them, especially that some of the villages are Christian," Walid Sukkariya, a member of Lebanon's parliament and former general of the Lebanese army told Sputnik.

According to Sukkariya, terrorists have attacked the positions of Lebanese soldiers in the area before, killing several servicemen.

"So, this is a sort of relocating for the Lebanese army for a better protection of the villages and their inhabitants, and to prevent terrorists from approaching the villages," Sukkariya explained.

Young Man in Austria Sentenced for Islamic State Facebook Postings
According to the former general, the Islamic State is "being weakened" in Iraq amid ongoing US-led coalition airstrikes (Iraq being the first country where ISIL positions were first targeted by US airstrikes last August), so the extremists are likely to move their positions to neighboring areas, including Lebanon.

"If they got out of Iraq, they will be located in places somewhere near Syria and they won't remain quiet and wait till they are attacked and killed. They will seek to expand their positions and head to vital areas so that they become stronger and have more supplies. Among the places ISIL militants might reach are Al-Qalamoun, Homs, Al-Qusayr and mountains in Lebanon, and they might, perhaps, reach the north of Lebanon," Sukkariya told Sputnik.

The member of Lebanon's parliament stressed that if Islamic State militants start to spread in Lebanon, they will strive to create an "emirate", threatening the Lebanese people.

Asia
ISIL Ready to Free Assyrian Christians if Int’l Coalition Stops Airstrikes
"The Lebanese army might then witness a sort of disintegration/disorder, and there is no Arab or international forces to intervene in to Lebanon to prevent terror expansion," Sukkariya warned.

Meanwhile another member of the country's parliament, Ghazi al-Zaiter, stressed that it is important for the Lebanese army to protect local citizens from terror groups, as villagers themselves could help in the fight against radicals such as ISIL.

"The villagers, that are being threatened and attacked, also help/support the Lebanese army to stand against terrorists," al-Zaiter, who is Lebanon's former minister of defense, explained in an interview with Sputnik.

US, Coalition Forces Conduct 31 Airstrikes Against ISIL in Syria, Iraq
IS militants have in recent weeks been carrying out training exercises in the strategically important Qalamun Mountains near the Lebanese border. IS had already clashed with Lebanon's army in August 2014 near the city of Arsal, on the border with Syria.

Government forces of both Syria and Iraq, a US-led coalition, as well as the Peshmerga (Kurdish militia) have all been battling against IS extremists. As a result of these combat operations, thousands of civilians have been killed.