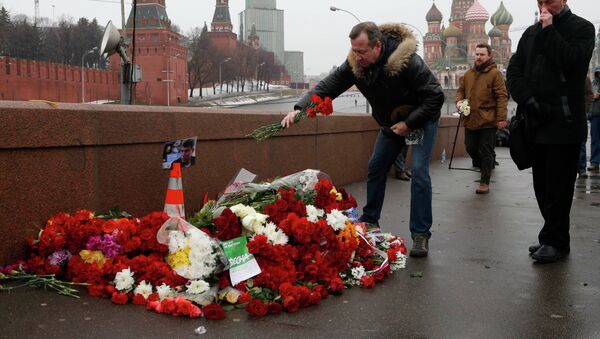 Putin expressed his condolences to the relatives of Boris Nemtsov and ordered the Investigative Committee, the Interior Ministry and the Federal Security Service to set up a special investigative team.

"Putin emphasized that this brutal murder has all signs of being ordered and is of an exclusively provocative character," Peskov said Saturday night.

According to the spokesman, the Russian president has ordered the Investigative Committee, the Interior Ministry and the Federal Security Service to set up an investigative team.

Putin also expressed his condolences to the relatives of Nemtsov, who was killed in Moscow at 11:40 pm on Friday, Moscow time (20:40 GMT), after four shots were fired in his back while he was walking with a female companion, according to the Interior Ministry.

Boris Nemtsov was 55 years old. He was born in Sochi. In 1985, he received his Ph.D in Physics and Mathemathics at the State University of Gorky. In 1991, Boris Nemtsov was appointed the governor of the Nizhny Novgorod Region. He also was a former deputy prime minister in the Russian government under President Boris Yeltsin. At one point he was considered a likely presidential candidate. Nemtsov co-chaired the RPR-PARNAS (Republican Party of Russia – People's Freedom Party) since 2012 and was also one of the leaders of the liberal Solidarnost movement. Since September 2013 and until his death, Nemtsov served as a member of the Yaroslavl Region's parliament.