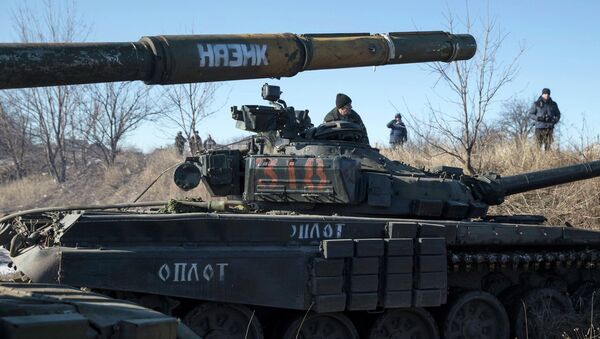 Some 200 Volunteers Join Donbas Forces Every Day - Donetsk Leader
DONETSK (Sputnik) — Donbas forces have pulled out a total of 17 artillery units from the separation line with Kiev-led forces under the recent Minsk peace plan, the deputy commander of the Donetsk People’s Republic (DPR) forces said Friday.

"At this point, the DPR army has withdrawn 17 artillery units, which constitutes the majority of artillery systems and large-caliber mortars stipulated by the Minsk peace agreements," Eduard Basurin said at a news briefing in Donetsk.

Basurin reaffirmed that the DPR had carried out the withdrawal of heavy weaponry in strict compliance with Minsk accords despite the absence of documented evidence confirming simultaneous pullout of heavy weaponry by Kiev-led forces.

The official added that the Donetsk authorities had registered a total of 19 violations of ceasefire by Kiev in the past 24 hours.

Kiev Begins Heavy Arms Withdrawal, Always Ready to Return - Poroshenko
Donetsk and neighboring Luhansk region militias began the unilateral pullout of large-caliber arms from the line of contact shortly after February 15, when the ceasefire in the region came into force.

Kiev followed a week later, pulling back 100-millimeter anti-tank guns on Thursday and planning to move heavier arms even further from the line of contact in the withdrawal's second stage.

As agreed by the sides on February 12 in the Belarusian capital Minsk, in addition to withdrawing heavy weapons, Ukraine's government forces and independence fighters were to observe a ceasefire and conduct an all-for-all prisoner exchange.

Under the terms of the deal, the withdrawal was scheduled to start no later than on the second day after the ceasefire came into force and was to conclude within 14 days.

The 13-point document's other requirements included a pardon and amnesty for those involved in the conflict, as well as constitutional reform in Ukraine.