Too Ambitious to be True? Iran Plans to Send Humans to Space by 2016

Subscribe
It was all smiles and cheers on Iran's National Day of Space Technology, celebrated this year on February 17, as the country unveiled a prototype of a spacecraft allegedly capable of taking a human to space. 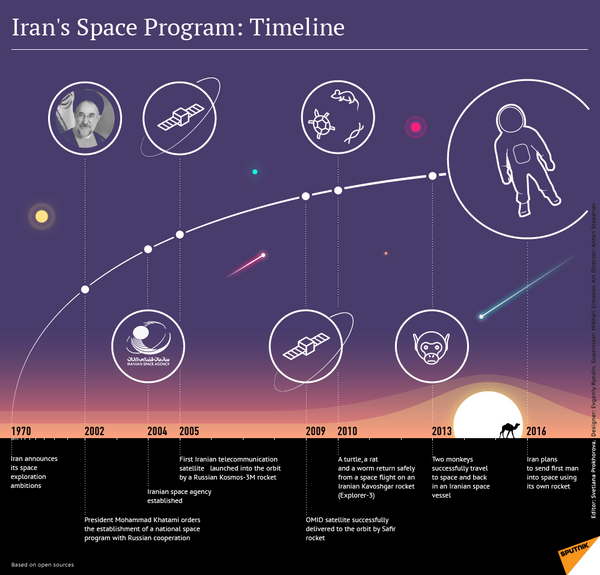 Authorities say the trial test will be conducted this year bringing the country closer to its wildest dream of sending a first astronaut where no Iranian has ever been before.

Tehran has recently announced that it will perform its first sub-orbital spaceflight by 2016.

Sky is No Limit for Iran: Tehran Sends Fourth Satellite Into Orbit
On February 2, the country successfully launched a Fajr (Dawn) satellite to space using a Safir-2 rocket. Iran is dead set on producing all the equipment required for space exploration at home, often seen as one the country's major short-term goals. The news prompted the Fars news agency to claim that in a few years' time we should "expect postcards and New Year greetings from Iranian astronauts in space."

However, the optimism might be premature. Many experts doubt Iran will master the technology and acquire the capabilities to achieve one of its most ambitious goals no matter how many times it repeats that sky is not the limit or how many animals it launches into orbit.

The world is yet to be fully convinced that Tehran indeed successfully launched animals into space. In 2013, the country claimed it sent two monkeys into space and safely returned them to the ground. Some doubts were raised as the country published different photos of the animals before and after the flight. In 2010, Iran sent several small animals into space, including a rat and a turtle.

Can't make this stuff up…Iran has chosen a Persian cat as the best candidate for a manned space mission it hopes to make by 2020!

Iran launched its first domestically-produced satellite in 2009. The country plans to send several more satellites into space by March 2016. The main function of the spacecraft is to transmit images of the Earth’s surface to ground stations.

Iran's space program has been subject to international concerns amid fears that it could be developing its rocket technology for military purposes, a charge which Tehran denies.

Last week, Iranian Minister of Communications and Information Technology Mahmoud Vaezi announced that Iran plans to expand its space program. However, reports emerged that the country might have canceled the program in early January.