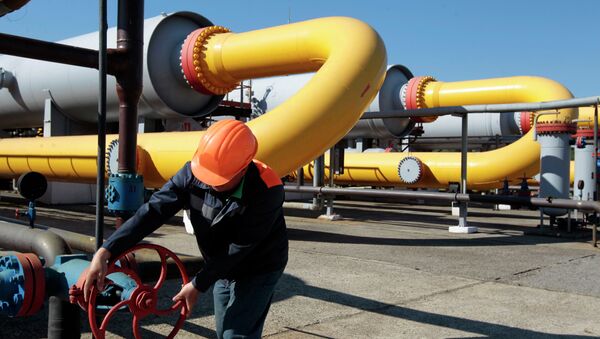 © AP Photo / Sergei Chuzavkov
Subscribe
International
India
Africa
Gazprom received a payment of $15 million from the Naftogaz of Ukraine that is enough for approximately 24 hours under current delivery volumes.

"At 09:20 [a.m. Moscow time, 06:20 GMT] today, Gazprom received a payment of $15 million from the Naftogaz of Ukraine. Under present delivery volumes, this payment is enough for approximately 24 hours," he told reporters.

The transfer of the funds was earlier confirmed by Ukraine's Naftogaz.

Russia-Ukraine-EU Trilateral Gas Talks on March 2 Confirmed
On Thursday, Gazprom spokesman Sergey Kupriyanov said that should Naftogaz fail to prepay for March deliveries by the end of the week, Gazprom would cut off gas supplies. Kupriyanov added that Kiev's standing balance was only sufficient for a few days of gas supplies.

In 2014, there was almost a six-month break in Russian gas deliveries to Ukraine due to the latter's outstanding debt, exceeding $5 billion at the time. In June, Gazprom switched Naftogaz to a prepayment system.

Gas deliveries resumed only in December following lengthy talks involving the European Commission, which resulted in the so-called "winter package" deal. The deal, which expires on April 1, 2015, stipulates that Ukraine must cover its debt, and pay Russia in advance for all future gas supplies.