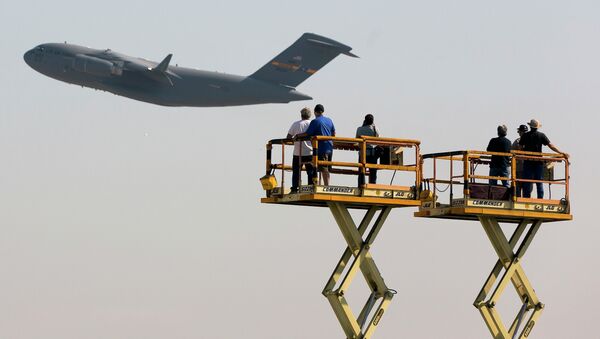 The UAE spent 18.33 billion dirhams ($5 billion) on deals signed with local and international arms dealers at the International Defence Exhibition and Conference (IDEX) in the capital Abu Dhabi, Reuters reported.

Russia Signs Arms Deal With UAE to Supply AU-220M Automatic Turret Module
The amount was the most spent since the IDEX began in the early 1900s, and a 30% increase from the last event, held in 2013.

The spending reflects regional political instability, particularly in Iraq and Syria. The UAE is one of the nations taking part in air strikes against Islamic State targets.

"It is according to the requirements of the armed forces, which is increasing," Obeid al-Ketbi, chairman of the organizing committee for the IDEX event in Abu Dhabi, told reporters, adding the quality of the requirements was also different to previous shows.

Among its most expensive contracts, the UAE agreed to pay 2.27 billion to Boeing for the purchase of two C-17 military transport planes, Reuters reported.

There also was a 3.75 billion dirham deal with Airbus and Thales to purchase two satellites and their land control stations, as well as a 732 million dirham contract with AgustaWestland to buy nine AW139 helicopters.

Around 1,200 companies from 55 countries showcased their military wares at the week-long event.