Citizens Economic Activities Make up Most of Russian Budget - Khodorkovsky 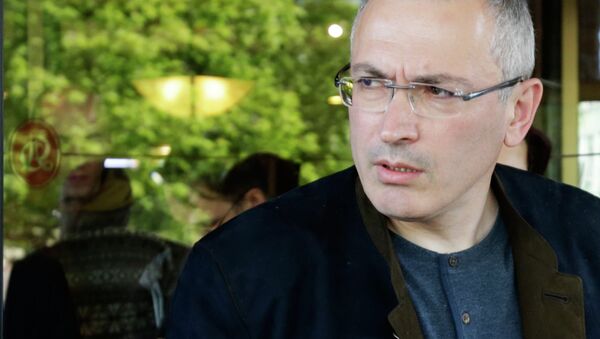 © Sputnik / Vasily Prokopenko
/
Go to the photo bank
Subscribe
Mikhail Khodorkovsky claims that Russian state budget is not solely made up of oil and gas revenues, most of the money comes from the economic activities of Russian citizens.

LONDON (Sputnik) — Russian state budget is not solely made up of oil and gas revenues, most of the money comes from the economic activities of Russian citizens, Mikhail Khodorkovsky, the former head of Yukos oil company, said Thursday during his annual lecture on Russia in London’s Chatham House.

“You might be surprised to hear that half of the Russian state budget is not made up of oil and gas revenues. If you combine the federal and regional budgets, then yes, oil and gas make up roughly a quarter of that combined total. But where does that other money come from? From the economic activities of Russian citizens,” Khodorkovsky said.

Russia to Have Surplus Budget by 2017 if Oil Prices Reach $70 a Barrel
Khodorkovsky added that Russia is not as dependent on oil and gas exports, as it is commonly thought.

“The oil and gas sector makes up no more than 20% of Russian GDP,” Khodorkovsky stated, adding that ordinary people who pay taxes also contribute to wealth creation.

Despite the ongoing difficulties in the Russian economy due to low oil prices and western sanctions implemented against Moscow over the Ukrainian crisis, Khodorkovsky said his outlook for the future of Russia is optimistic. Khodorkovsky thinks that the new generation of well-educated Russian people can help to strengthen the country’s economy.

“I see a whole generation of people that has formed over the past twenty-five years who are talented and well educated, many of them are citizens of the world, in the fullest sense of the word, and can compete with the leaders in their respective field,” he said.

Despite Khodorkovsky’s previous statements that he is not interested to be involved in politics, he now said that he sees an alternative to the current Russia's political course.

“We will not only work with political and civic activists, but we will bring in everyone who shares our values, and supports our aims – openness and the cooperation of everyone at all levels… We will propose a realistic plan of economic reforms, which will allow the country to realise its economic potential and secure the necessary economic growth,” he stated.

Khodorkovsky spent 10 years in prison for fraud and tax evasion until he was pardoned in December 2013.