Duma May Reconsider Primacy of International Law in Russian Constitution 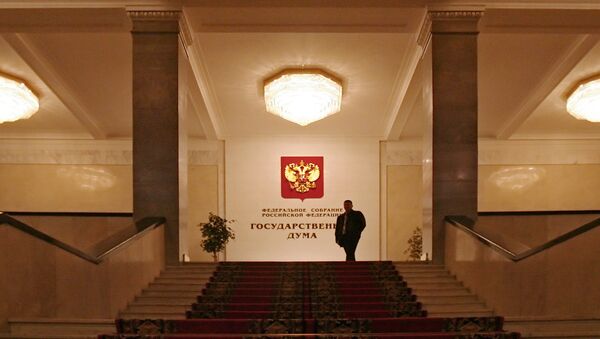 © Sputnik / Vladimir Fedorenko
Subscribe
International
India
Africa
The Russian Duma is set to consider the legitimacy of the primacy of international law over national legislation in the Russian constitution.

Russia
Russia's Duma to Ask Putin to Slash Lawmakers' Wages for Budget Cutbacks
The Russian parliament's Constitutional Law and Nation Building Committee is set to look into the legitimacy of the norm of the Russian Constitution establishing the primacy of international law over national legislation.

Committee Head Vladimir Pligin stated on Thursday that "as part of the Duma's report on the development of legislation in the year 2015, we will analyze the international treaties of the Russian Federation and the whole of its international legal and regulatory material."

Earlier in the day, Alexander Bastrykhin, Head of Russia's Investigative Committee, which serves as the country's main federal investigative authority, stated that the primacy of international law in the constitution amounts to the "sabotage" of Russia's legal system. Speaking before his Committee colleagues, Bastrykhin argued that "other countries have more flexible mechanisms," and that the present law favors Russia's geopolitical opponents. The official proposed that altering the constitution to remove the primacy of international law would "strengthen the independence of the Russian Federation in the legal sphere."

EU 'Threatrical' Unity on Sanctions Against Russia Not Real – Duma Speaker
Human rights officials were quick to step out against Bastrykin's proposal. Chairman of the Presidential Human Rights Council Mikhail Fedotov noted that the proposed changes were "an impossibility," stating that they would remove a fundamental pillar of Russian constitution law. Lyudmila Alexeeva, the head of the Moscow Helsinki Group, noted that the change would be a "step by the state into the past, into isolation." Duma deputy Vasili Lihachev also voiced his opposition to the proposal, noting that the present constitution supports the "image and international authority" of the country abroad.

But other experts, politicians and public figures, including United Russia Duma deputy Yevgeni Fedorov, have long argued that the present constitution works to undermine the country's sovereignty.

Those supporting the changes note that the current law was adopted in December 1993, when the country was heavily dependent on Western aid and balanced on the brink of civil war. They argue that the present constitution, drawn up following the collapse of the Soviet Union, formalized the country's defeat in the Cold War. They have pointed to the fact that Germany, Italy and Japan, countries which suffered defeat in the Second World War, have similarly intrusive provisions in their constitutions. In the US, Britain, and France, on the other hand, conflicts between domestic and international laws are resolved with domestic statutes and precedents taking precedence. Proponents for revising the law argue that it would allow Russia to fully regain its status as a great power.

Russia
Russian Constitution Day in Facts and History
Stormy discussion on the proposed amendment stems back to 2010, when Valery Zorkin, the Chairman of the Constitutional Court, noted that in the event that the laws and decisions of international courts challenge those of the Russian Federation, Russian law should prevail. In 2012, President Putin warned against the "erosion of the country's constitution," noting that it could lead "to the erosion and destabilization of the state."
Newsfeed
0
Access to the chat has been blocked for violating the rules . You will be able to participate again through:∞. If you do not agree with the blocking, please use the feedback form
The discussion is closed. You can participate in the discussion within 24 hours after the publication of the article.
To participate in the discussion
log in or register
loader
Chats
Заголовок открываемого материала