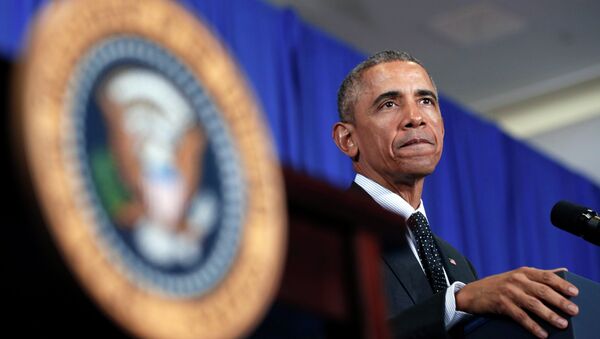 © REUTERS / Kevin Lamarque
Subscribe
Obama has a Middle East problem. Almost all states which went through the Arab Spring revolutions are dumping the US and looking to Russia for help. Here are five reasons why.

As Obama's foreign policy falters, even former US allies are turning toward Russia for support. In February, high-profile visits to Moscow were made by Libya's prime minister and Yemen's ruling coalition. On February 10, Putin made a visit to Egypt which has been labelled as historic by analysts, and led to multiple high-level visits since.

However, the leaders are not only seeking access to Russia's historically strong military industry, but also its economic cooperation and political clout at the United Nations Security Council as they realize that dealing with the United States is a dead end. There are five main reasons why post-Arab Spring states are yearning for Russia's support.

1. The US Only Provides Weapons When it Serves Its Doctrine

Libya Asks Moscow to Train Its Army, Supply Modern Weaponry
Following the NATO intervention which led to the overthrow of Muammar Gadhafi during the 2011 Libyan Civil War, the country was discarded by the West. A conflict between secular and Islamist factions who came to power led to a second civil war in 2014. Now, the secular government is yearning for Russia' support as it battles the Muslim Brotherhood-dominated Islamist faction as well as jihadists, including the Islamic State, is yearning for Russia's support.

"The United States and Britain have been supporting armed groups while at the same time denying weapons to the Libyan army," the country's internationally-recognized Prime Minister Abdullah al-Thani told Sputnik on Tuesday.

Al-Thani, previously announced that Libya hopes for a military cooperation with Russia, in both weapons supplies and training, during a press conference at the Rossiya Segodnya press center in Moscow on February 5.

Russia Plans to Build Four 1,200-MW Capacity NPP Units in Egypt - Rosatom
Having lost a considerable amount of infrastructure in the Civil War, Libya cannot afford expensive Western technologies other than through IMF and World Bank loans which have political strings attached, such as austerity policies. The other choice is Russia, which is willing to finance deals on much more generous terms and at a lower price.

"We have big plans for electricity generation and the construction of railroads. We had contracts with Russian companies for all of these things. We welcome the return of Russian companies to Libya because they are reliable and perform quality work," Al-Thani told Sputnik. "We welcome them. We are, of course, ready to continue work on contracts signed in the past."

In Egypt, along with a trade mission which Russian Railways is joining in March, Egypt seeks nuclear power, which Russia's Rosatom is willing to provide.
"We are talking about using Russian technologies to build a four-bloc nuclear power plant, 1,200 megawatts each," head of Rosatom Sergei Kirienko announced on February 12.

3. The US Cannot Solve the Problems Which Caused the 2011 Protests

Putin's Visit to Egypt Spells Hope for the Middle East
To prevent the food crisis which caused the 2011 revolution, Egypt is turning to Russia to build a grain terminal that would allow Egypt to hold 80 percent of its grain needs to cover the next time grain prices spike.

"We made an inquiry for the project's parameters. This is a very modern granary which can store up to seven or eight million tons. This granary could be made into an interregional center," Russia's Minister of Agriculture Nikolai Fedorov announced on February 10. "Compared to 2013, we doubled shipments by almost two times, to over four million tons, or up to 40 percent of Egypt's import."

4. The US Relationship With Gulf Monarchies Makes Conflict Resolution Impossible

US Ineffective Middle East Mediator – Organization for Islamic Cooperation
Egypt and Libya both seek Russia's help at the UN Security Council, which the US is unwilling to provide as it would help destroy the Qatar-aligned Islamist faction in the Libyan Civil War. Libya has asked Russia for help in ending the arms embargo on the internationally-recognized government. Meanwhile, Egypt is working with Russia on a resolution which would allow for a military intervention to destroy jihadist influence in Libya after ISIL killed 21 Egyptian Copts.

On Wednesday, a group of Yemeni political groups including Ansar Allah, the General People's Congress and the Socialist Party arrived in Moscow following an invitation from State Duma deputies. The Yemenis are offering Russia the chance to develop Yemeni oil deposits in exchange for recognition, which would help the Houthis' escalating conflict with Saudi Arabia.

5. America is a Dead End for People Who Seek Change

The West Has Written an Ideological Check to Ukraine Which It Can't Cash
After NATO abandoned Libya and Egypt was left with an increasingly extremist Morsi, it became increasingly apparent to post-Arab Spring states that the United States has no interest in those countries' prosperity. The United States, at the level of doctrine, is only be interested in spreading its influence, which is measured in friendly states' control by the IMF and the weakness of potential rivals, such as Russia or Iran.
Meanwhile in Syria, where the United States has decided to arm and train "moderate" Syrian rebels to fight ISIL, John Kerry has been building a case for attacking Assad.

"It seems to me that if Assad were to attack them or somebody attacks them in the course of the time that they're going after ISIL, that's part of the fight," US Secretary of State John Kerry said at a budget authorization hearing at the US Senate Foreign Affairs Committee on February 24. Stopping short of saying that Assad would have to be attacked, Kerry added, "They have to be authorized — the authorization is such that defending those who are engaged in the fight of ISIL is an important part of defeating ISIL."

However, just as with Libya, the United States does not have a role for Syria after its government is overthrown, other than destroying its economic relationship with Russia and its plans for a pipeline to the Mediterranean with Iran.