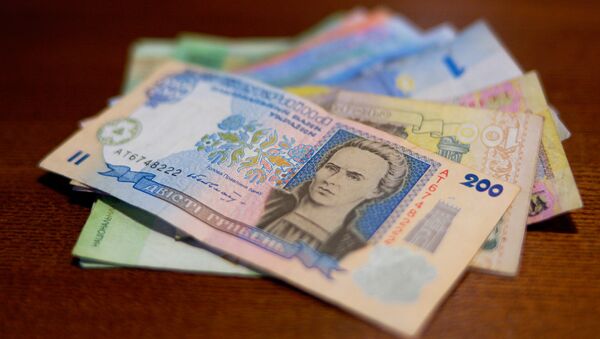 © Sputnik / Sergei Kirkach
Subscribe
The breakaway self-proclaimed Donetsk and Luhansk People's Republics are moving to a multicurrency system of payments which include the US dollar, euro and Chinese yuan, in connection with Kiev's continuing economic blockade and the depreciation of the hryvnia.

LNR region Head Igor Plotnitsky said that "a decision was made for a multicurrency system to begin operating in the republic," the Luhansk Information Center news portal reported.

Speaking before reporters in the village of Chernuhino, Plotnitsky explained that the decision was made because "Ukraine is not planning to lift its economic blockade, despite an earlier agreement to do so, and due to the fact that Ukraine's [currency] has depreciated to the extent that large cities witness people buying up everything in sight from the stores."

Luhansk's multicurrency system will include the ruble, the hryvnia, the dollar, and other currencies, Plotnitsky added.

The neighboring Donetsk People's Republic has also made the decision to move to a multicurrency system, DPR negotiator Denis Pushilin said Thursday.

Donetsk Doubts Kiev's Will to Comply With Minsk Agreements - Negotiator
Speaking at a roundtable discussion in the southern Russian city of Rostov-on-Don, Pushilin noted that in connection with the fact that "the hryvnia is depreciating…we have now allowed a number of foreign currencies to be used, including the dollar, the euro, and the Chinese yuan."

Pushilin noted that this would be a temporary measure until it becomes clear whether the DPR's economy would remain connected to the hryvnia or be forced to find other alternatives, possibly including the printing its own local currency.

“The printing of currency is a very expensive and long-term proposition. It’s important to understand how it would be supported financially,” Pushilin said, adding that “we have enough serious threats [to our economy] as it is to be looking at this issue seriously at present.”

In November 2014, Deputy Chairman of the DPR Council of Ministers Alexander Karaman had stated that DPR authorities were considering the introduction of their own currency to replace the hryvnia. In December, a source at the DPR press service said that the DPR had no immediate plans to introduce its own currency, citing lack of need and the costliness of the move.

On Wednesday, LNR and DPR officials accused Kiev of threatening the agreed upon plans to withdraw heavy weaponry from the conflict zone, with Kiev officials stating that the Ukrainian army would begin a heavy weapons pullout only if the ceasefire in eastern Ukraine held for at least 48 hours.