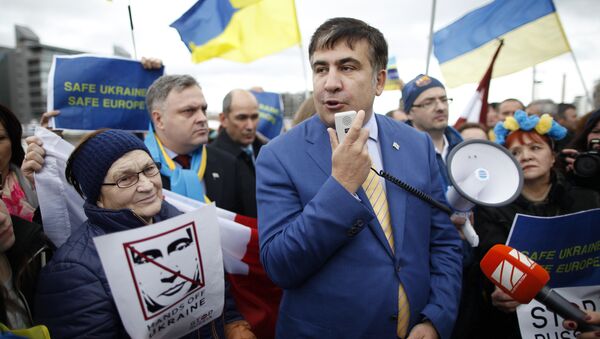 Former Georgian President Mikhail Saakashvili is on a mission. He’s come to Washington to persuade national legislators and government officials that they should arm the Ukrainian government.

While US President Barack Obama’s administration declared publicly that it hasn't made a decision about sending lethal military aid to Ukraine, and European powers as well as Russia have warned Washington against doing so, Beltway hawks are getting another blast of warmongering adrenaline from a man who led his country to a disastrous war in 2008 and now seems eager to push Ukraine into an open confrontation with Russia.

Saakashvili's closest friends in Washington: ever looking for a place to send US troops, Senator John McCain and his sidekick Sen. Lindsay Graham have long been advocating for sending arms in support of Petro Poroshenko’s government in Kiev.  Western powers failing to come to Ukraine’s aid “are legitimizing the dismemberment of a sovereign nation in Europe for the first time in seven decades,” they wrote in a joint statement.

However, Saakashvili — who has recently become an adviser to Ukrainian President Poroshenko — is looking to expand the number of supporters ready to arm Kiev.

Obviously, in the name of democracy and progress.

"[N]ever have so many [U.S.] lawmakers agreed to meet with me, even when I was president:” he posted on Facebook about the trip. “34 meetings in three days."

Calling Ukraine “today’s West Berlin,” Saakashvili painted the conflict in unequivocal terms in a Feb. 24 op-ed in the Washington Post, appearing just in time for him to meet with US lawmakers.

“What is being decided in Ukraine — the largest country in Europe — is whether the post-Soviet space will be allowed to free itself from a vicious cycle of inefficiency, corruption, violence and failed governments to build instead modern, open, democratic societies,” he wrote.

While Saakashvili is on an international tour to drum up military aid, his own country has sought to have him extradited from Ukraine to face charges of abuse of authority.

Ukraine has so far refused Georgia’s extradition request, and Saakashvili has called the charges politically motivated and “a farce.”

Great Embarrassment for Washington if Saakashvili Is Convicted: Expert

Though the charges relate to abuses of power from earlier in his presidency, Saakashvili also came under fire from the European Union for his role in the 2008 war with Russia which led to Russia's recognition of Abkhazia and South Ossetia as independent states.

The EU-commissioned report blamed Saakashvili for starting the conflict due to his "penchant for acting in the heat of the moment.” The report further dismissed claims that Russia had attacked prior to Georgia’s bombardment of the Southern Ossetian town of Tskhinvali, the first confrontation of the war.

"It is not possible to accept that the shelling of Tskhinvali with Grad multiple rocket launchers and heavy artillery would satisfy the requirements of having been necessary and proportionate," the 2009 report concluded.

Saakashvili was elected in 2004 and held office until 2013, with strong support from the United States. The opposition Georgian Dream coalition won the country’s 2012 parliamentary elections, while the United National Movement, the ruling party since the Rose Revolution in 2003 and led by former President Saakashvili, became its rival. A year later, Giorgi Margvelashvili from Georgian Dream won the presidency, replacing Saakashvili. Immediately after losing presidential immunity, Saakashvili fled the country and since then has refused to return to Georgia to face the trial.