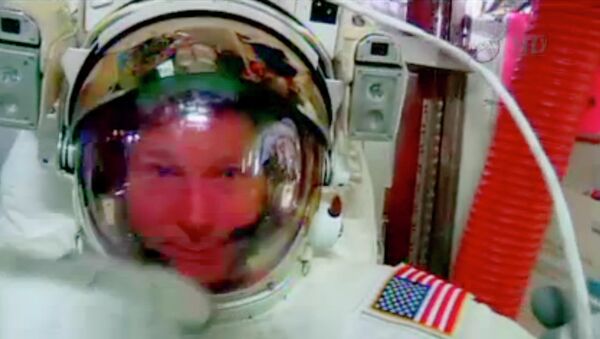 © AP Photo / NASA
Subscribe
An spacewalking American astronaut found himself in a potentially fatal situation when water entered his helmet near the end of his spacewalk excursion on Wednesday.

NASA astronaut Terry Virts found a watery bubble floating inside his helmet, near his left eye, as he was outside of the International Space Station.

Virts was outside for 6.5 hours, but first noticed the water after he had entered the air lock. He reported it to Mission Control about a minute later.

The absorbent pad inside the back of Virts' helmet was damp, but not saturated, said Italian astronaut Samantha Cristoforetti, according to the Associated Press.

Cristoforetti removed Virts' helmet and wiped his face with a towel. She noted that his neck was wet and cold. 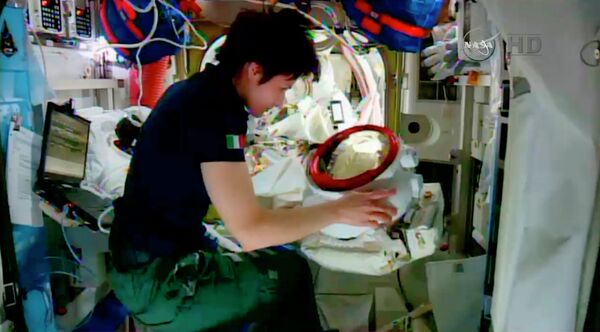 In this screenshot from a video provided by NASA, Italian astronaut Samantha Cristoforetti checks the helmet of American astronaut Terry Virts inside the International Space Station on Wednesday.
© AP Photo / NASA

The water most likely came from the suit's cooling system, the AP reported. That same suit ended up with water in the helmet during a Christmas Eve spacewalk in 2013.

Mission Control described the amount of water as "minor," at least compared to a July 2013 near-fatal incident in which another astronaut nearly drowned.

That year, another spacewalking astronaut, Italian Luca Parmitano, had his helmet flood as he struggled to make his way back into the safety of the orbiting lab. Parmitano barely made it back in time.

After a months-long investigation, NASA cited clogged holes in a fan and pump assembly as the cause of the emergency.

Mission Control said that Virts, a 47-year-old Air Force colonel, was in no such danger on Wednesday.

This was the second spacewalk in five days for Virts and fellow American Butch Wilmore. Three had been planned, with the third one scheduled for Sunday. Its status is now uncertain due to Wednesday's mishap.

In Parmitano’s case, his cool head helped keep him safe as he made his way back to the airlock, NASA officials said in an investigation report.

Parmitano’s “calm demeanor in the face of his helmet filling with water possibly saved his life," members of the Mishap Investigation Board wrote in their report.