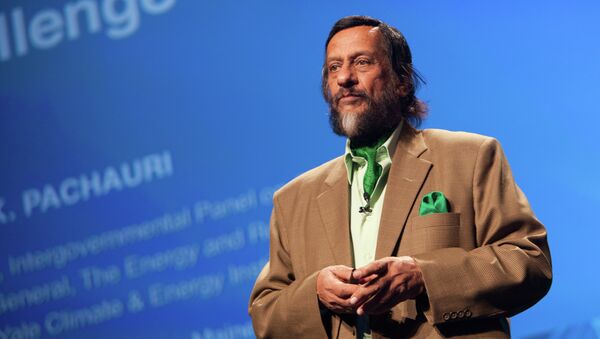 MOSCOW (Sputnik), Daria Chernyshova — One of the world’s most influential organizations in the sphere of climate change — the UN Intergovernmental Panel on Climate Change (IPCC) — should be drastically reformed, the Global Warming Policy Forum (GWPF) urged Wednesday following the resignation of the IPCC chairman amid sexual harassment allegations.

“[The] IPCC is seen as a green lobby-group rather than a scientific authority. And that is a problem because governments themselves need to trust this organization,” GPWF director Benny Peiser told Sputnik news agency Wednesday.

On Tuesday, Rajendra Pachauri stepped down as the chair of the Nobel Peace Prize-winning IPCC. He was accused of sexual harassment by a researcher. The IPCC unites presidents and prime ministers attempting to tackle climate change, and the IPCC chairman is seen as one of the most influential people advising governments in the area of energy and climate policy. Pachauri was at the IPCC helm for over 13 years.

UN Climate Process to Lose Credibility if Paris Talks Fail: Ex EU Official
In his resignation letter, Pachauri said that "For me the protection of Planet Earth, the survival of all species and sustainability of our ecosystems is more than a mission. It is my religion and my dharma."

Interpreting the letter, the GPWF director stressed it is very alarming that “the whole issue of climate change is [a] religion.” He noted that the IPCC has been one-sided and not objective, as it pushed out all those who disagreed with the “group’s religion.”

“The organization is extremely one-sided, it has pushed out anyone who has not accepted the general philosophy, the gist of the organization and instead of issuing balanced and objective reports, it has tended over the years to exaggerate the issue,” Peiser told Sputnik adding that the IPCC should include critical scientists, who are not a part of the organization at the moment.

At the same time, Peiser noted that the organization’s reports were quite good, but the “leadership cherry-picked the negative aspects and ignored the positive aspects that were also covered in the reports.”

“The lack of moderation, lack of balance and the lack of credibility – that is at the core of the problem and all we are asking the governments to do is to make the IPCC a more reliable and less alarmist organization that the governments could trust,” Peiser said.

The IPCC is an intergovernmental body under the auspices of the UN which has a leading role in the assessment of climate change. It was established in 1988 to provide the world with a clear scientific view on the current state of knowledge on climate change.