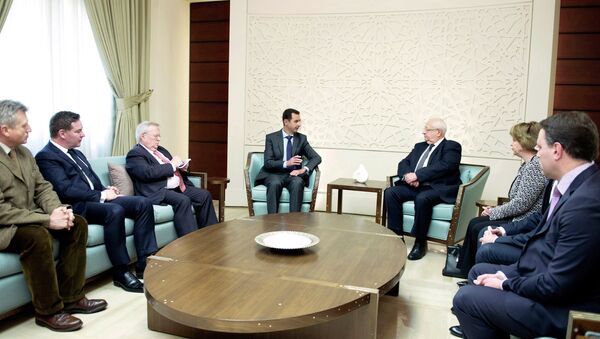 © REUTERS / SANA
Subscribe
Despite the French government’s official policy of not meeting with Syrian President Bashar al-Assad, four French parliamentarians met with the leader in Damascus on Wednesday. The first such engagement in three years, the talk could indicate European lawmakers’ willingness to place terrorism concerns over formal government position.

“France’s position is clear,” a diplomatic source for the French Foreign Ministry told Reuters. “We do not talk to Assad or his clique.” This is largely emblematic of the European stance toward Syria ever since the Assad government began its crackdown on anti-government protesters. France closed its Syrian embassy in 2012.

But four French parliamentarians have done just that, after traveling to Damascus to meet with Assad on Wednesday. The delegation included Gerard Bapt of the ruling Socialist Party, and Jacque Myard.

The French Foreign Ministry was quick to point out that the trip was not approved by the foreign affairs committee, but the lawmakers stress their belief that Syria will play a vital role in combating terrorist threats, particularly the self-proclaimed Islamic State.

“Coming here does not mean we back what’s happened,” Myard told BFM TV. “The objective is to understand Assad’s regime better, because we don’t believe we can fight Islamic State without Syria.”

This is an opinion echoed by a number of European diplomats, according to Reuters. As Assad has managed to maintain power throughout the Syrian civil war, many question how long Western nations can continue to ostracize the leader.

The Syrian state news agency paraphrased Assad as saying that Syria “always encourages cooperation between states as the most effective way to stop the expansion of terrorism and eliminate it.”

Also on Wednesday, an imprisoned Syrian opposition figure, Louay Hussein was released on bail, according to Hussein’s group, Building the Syrian State. Whether the parliamentarians’ visit had anything to do with this is unclear.

Despite this encouragement, Western nations have repeatedly refused to recognize Assad’s legitimacy. On Tuesday, President Obama reaffirmed his belief that Assad should step down from his position, during a meeting with Tamim bin Hamad al-Thani, Emir of Qatar.

“We both are deeply concerned about the situation in Syria,” Obama said. “We’ll continue to support the moderate opposition there and continue to believe that it will not be possible to fully stabilize that country until Mr. Assad, who has lost legitimacy in the country, is transitioned out.”

Last week, the US signed a deal with Turkey in which both countries agree to provide both training and equipment to so-called "moderate" rebels fighting the Syrian government. Several US officials, including former US ambassador to Syria, Robert Ford, expressed concerns about arming the Syrian opposition.

Since the civil war began, over 200,000 people have been killed in Syria. The ensuing chaos in Syria and neighboring Iraq have allowed the rise of Islamist militants, including the Islamic State terrorist group.