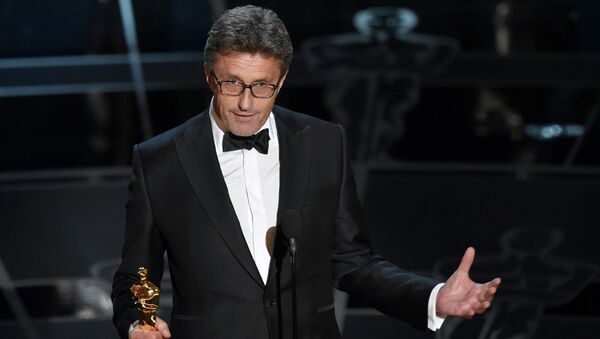 Following Ida's Oscar win for Best Foreign Language Film, Poles ruminate over their role in the Holocaust and an Israeli group weighs in on the importance of restitution.

Polish Pawel Pawlikowski's 'Ida' Wins Oscar for Best Foreign-Language Film
Pawel Pawlikowski's film Ida's Oscar win on Sunday has sparked a debate about the role of Poland in WWII and the relationship between Poles and Jews since then.

"It shows history in a distorting mirror, and portrays Poles as anti-Semites. This is a false image. Germans were the anti-Semites, Germans committed the mass murders," historian Tadeusz Pluzanski told Polish news daily wPolityce. "The world again saw and awarded a film which shows Poles in an unfavorable light. This is a pedagogy of shame which we have been fed for a long time, and which we impose on ourselves."

The film, which portrays a Polish woman who is aspiring to be a nun in 1960s Poland, has a scene in which her birth parents and brother are killed by a Polish man during WWII, who then acquires their farm. In Israel, the film received a fitting response.

Polish Holocaust 'Humor' in Estonian Gallery Tests Boundaries of Art
"Poland is the only major country in Eastern Europe that has not passed legislation to address the loss of Holocaust-era property. Hundreds of thousands of Jewish homes were simply taken and no compensation ever paid," Chair of Operations for the Jewish Restitution Organization, Gideon Taylor wrote in the Times of Israel. "Yet Poland was alone among [Eastern bloc] countries in not addressing the issue in any kind of national framework."

In January the Polish Anti-Defamation League, a Polish nationalist group which seeks to "protect the good name" of Poles and Poland, circulated a petition against the film, demanding that the director added contextual captions that explain that Poles were also mass-murdered during WWII and that many Poles sheltered Jews from Nazis.