Chinese Carmakers to Bring Homemade Electric Vehicles to Russia in 2015 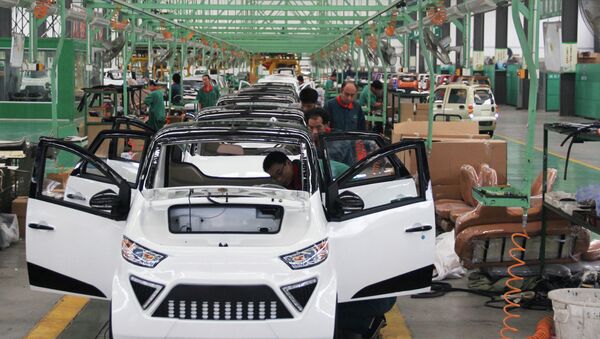 © AFP 2023
Subscribe
International
India
Africa
Electric cars from China that will be available in the budget segment starting at 800,000 rubles (almost $13,000) could become popular on Russian roads by next summer, according to the head of the Russian car dealer Revolta Motors.

MOSCOW (Sputnik) — Genuine electric cars from China are to hit Russian roads by next summer, the head of the Russian car dealer Revolta Motors said Wednesday.

Chinese Manufacturer to Supply Nearly 300 Subway Cars to Boston Underground
"New carmakers have emerged in China that produce their own vehicles in cooperation with foreign manufacturers, rather than build replicas and clones of European and American cars. We have short-listed two Chinese automakers and are working together with them," Revolta Motors CEO Maxim Osorin told journalists at a press conference.

Osorin said battery-powered vehicles will be available in the budget segment starting at 800,000 rubles (almost $13,000). They are powered by lithium-ion batteries that take three hours to fully charge.

There are currently only 500 electric and hybrid cars on Russian roads, including 300 vehicles that were imported in 2014.