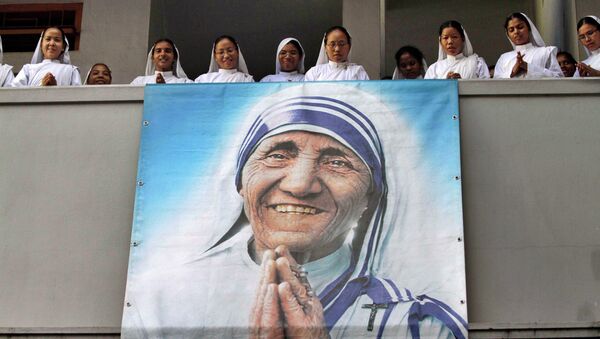 © AP Photo / Bikas Das
Subscribe
The head of India's Hindu nationalist group has been harshly criticized over his controversial remarks about Mother Teresa.

Speaking at an inaugural ceremony for an orphanage and a home for impoverished women in the state of Rajasthan, Bhagwat said that Mother Teresa's service to the poor in India had allegedly been motivated by her desire to convert them to Christianity.

"It is their question if somebody wants to convert and make someone Christian or not. But if that is done under the garb of service, then that service is devalued," Bhagwat said.

An ethnically Albanian Roman Catholic nun, Mother Teresa, who died in 1997 in Kolkata, won the 1979 Nobel Peace Prize and was beatified as the "Blessed Teresa of Calcutta" in 2003. She was awarded the Nobel Peace Prize for her "work in bringing help to suffering humanity."

The Catholic Church was quick to express its unhappiness over Bhagwat's remarks.

"It is quite unfortunate that the services of such a world-renowned Nobel Prize laureate and Bharat Ratna awardee like Mother Teresa being dragged into unwarranted controversies," Cardinal Mar Baselios Cleemis, President of the Catholic Bishops' Conference of India, said.

He was echoed   by a spate of opposition politicians, including new chief minister of Delhi Arvind Kejriwal of the Aam Aadmi Party, who lauded Mother Teresa as a "noble soul" and warned against attempts to tarnish her reputation.

The Institute of the Blessed Virgin Mary (Loreto)'s Sister M. Cyril, who had a close relationship with Teresa, also condemned Bhagwat’s remarks.

They came days after Indian Prime Minister Narendra Modi gave a speech in which he condemned religious violence in India amid an increasing sense of insecurity among Catholics and other religious minorities.