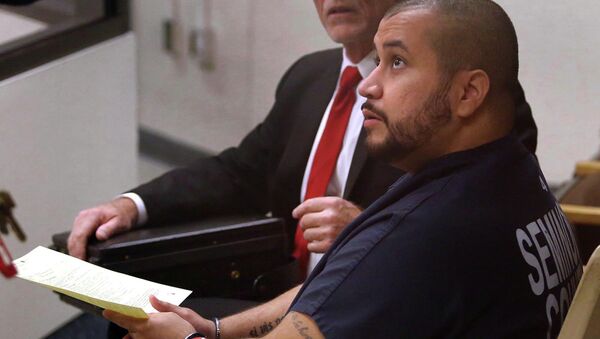 The family of slain African-American teen Trayvon Martin stated that they are disappointed by the decision of the US Department of Justice not to hand federal criminal civil rights charges to Zimmerman.

WASHINGTON (Sputnik) — The family of slain African-American teen Trayvon Martin fatally shot by a neighbourhood watch leader George Zimmerman are disappointed by the decision of the US Department of Justice (DOJ) not to hand federal criminal civil rights charges to him, but will continue to advocate against violence in US communities, the Martin family said in a statement.

“Although we are disappointed in these findings… we remain poised to do everything in our power to help eradicate senseless violence in our communities,” the Martin family said in the statement on Tuesday. “We don't want any other parents to experience the unexplainable loss we have endured.”

The Martin family thanked the DOJ for its “extensive and thorough” independent investigation into Trayvon’s killing and the millions of people who supported them following the fatal shooting, but said that they would never forget what happened to their son.

Justice Department: No Charges for Zimmerman in Trayvon Martin's Death
Earlier on Tuesday, the DOJ announced it would not charge George Zimmerman with federal criminal civil rights charges in the death of Trayvon Martin.

Following the fatal shooting of Martin, the DOJ put together a federal investigation team separate from the state of Florida’s investigation of the shooting to determine whether the evidence leading up to Martin’s death were sufficient to prove that Zimmerman violated federal criminal civil rights statutes including targeting and fatally shooting martin because of his race.

In 2012, 17-year-old Martin was fatally shot by Zimmerman, a self-appointed neighbourhood watch leader, in Florida suburb while he was walking home from a convenience store after buying candy. The fatal shooting triggered massive racial protests in Florida and around the country calling for an end to race related police brutality.

Two years later, the United States revisited the issues of race and police brutality following numerous deaths of unarmed African-American men in 2014 at the hands of white police officers.