Marijuana’s Next Frontier: Alaska Becomes 3rd US State to Legally Light Up 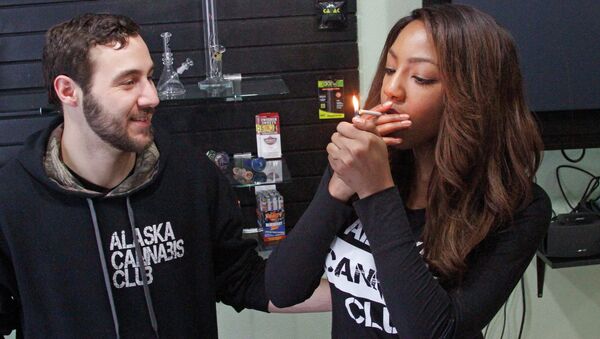 Following in the footsteps of Washington and Colorado, Alaska became the third state to legalize recreational marijuana. But many are still confused about where, exactly, they can legally light up.

A new law which allows recreational marijuana went into effect on Tuesday, after state legislators voted in favor of the measure last November, with a vote of 53-47. Anyone over the age of 18 can not only smoke pot, but also grow their own. Selling, however, is still illegal.

A second part of the law, expected to take effect in 2016, will address taxation and regulation of the product. Once this portion of legislation takes effect, retail stores can begin operation.

“The state is now crafting regulations for marijuana retailers, and the stores will be licensed and operating by next year,” Alaska Public Media’s Alexandra Gutierrez told NPR.

But pot legalization represents a major cultural shift in the state, and many are still hesitant to see acceptance of what was long considered to be a gateway drug. Because of this, Alaska’s marijuana legislation still has a few kinks which need to be sorted out.

While adults can now grow and enjoy marijuana, it must be done away from public space. Individuals caught smoking in public will face a $100 fine. But the law failed to specifically address what actually qualifies as private. As a result, various communities across the state have assembled their own guidelines.

In Anchorage, one of Alaska’s largest cities, police are already vigilantly patrolling the streets, sniffing for doobies, checking for bloodshot eyes. But Anchorage officials are also warning users not to smoke on their private porches if they live next to open, public space.

On the other hand, further inland, in the small town of North Pole, users are free to blaze on their private lawns, provided that toke cloud doesn’t bother the neighbors.

The Kenai Peninsula, just south of Anchorage, is considering a ban on growing.

The law will also be interpreted differently by various Native communities in the state. Tribal councils are allowed to regulate alcohol locally, and many enact full prohibition on all drugs and spirits. Each of these villages will come to their own conclusions about marijuana legislation.

“When they start depending on smoking marijuana, I don’t know how far they’d go to get the funds they need to support it, to support themselves,” Edward Nick, council member in the small village of Manokotak, told the AP.

The lack of a legal marijuana market may also leave smokers in a haze. Anyone who doesn’t grow their own must rely on charity from friends, for the time being. Buying, or even bartering, for pot remains illegal until the regulatory framework is put in place.

Much of that charity may come from local celebrity Charlo Greene, the former KTVA reporter who famously quit mid-broadcast after the legislation passed. Current CEO of the Alaska Cannabis Club, Greene refuses to let the ban on sales get in the way of her grand opening. The store opens in downtown Anchorage on Tuesday, and Greene plans to give away free pot for the time being, a move sure to build a loyal crowd of customers.

Similar legislation was also passed in Oregon in November, and legalization there will begin July. Voters in Washington DC also sided in favor of recreational marijuana, but the implementation of a regulatory system for that law is being held up by Congress.

For now, smokers in the District may want to catch the first flight to Anchorage. If they get there before 4:20, they can join Greene for a celebratory puff. Complimentary Doritos and Hot Pockets appreciated.