Lavrov: 'Normandy Four' Talks on Ukraine in Paris Were 'Fruitful' 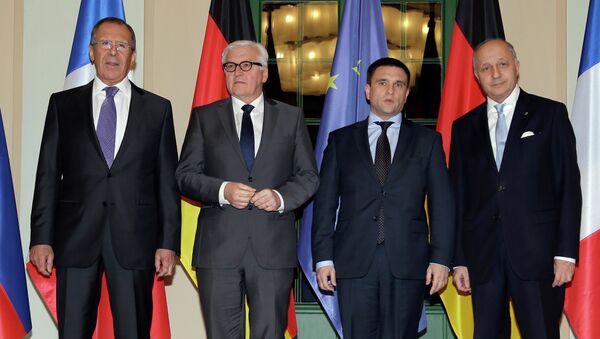 © AP Photo / Michael Sohn, pool
Subscribe
The meeting of the foreign ministers of Russia, Ukraine, Germany, and France was held on Tuesday in Paris.

German, French Leaders Would Rather Trust Moscow Than Not – Putin
PARIS, (Sputnik) — The meeting of foreign ministers of the so-called Normandy Quartet on ways to resolve the ongoing crisis in eastern Ukraine was "fruitful," Russian Foreign Minister Sergei Lavrov said Tuesday.

Top diplomats from Russia, France, Ukraine and Germany held three-hour consultations in Paris Tuesday for the first time since the Normandy Quartet summit in Minsk on February 12 that led to a new ceasefire in the contested Donbas region of Ukraine.

"It was a useful meeting," Lavrov told reporters in a brief comment without further elaboration.

Ukrainian Foreign Minister Pavlo Klymkin said after the Paris meeting that the participants had agreed on "important technicalities" of supporting the OSCE monitoring mission in Ukraine, while French Foreign Minister Laurent Fabius stressed that the Normandy Quartet ministers had called for the provision of additional equipment and financing for the mission.

According to the Russian Foreign minister the situation in Donbas has improved significantly, a point that Russia's Western partners have also acknowledged.

"The situation has improved significantly, this was acknowledged by my partners," Russia's top diplomat said following the Paris meeting.

The truce in Donbas came into force on February 15, and, according to the OSCE monitors is generally holding.

Earlier on Tuesday, the deputy commander of the Donetsk People's Republic (DPR) militia said that the DPR had started withdrawing heavy weaponry from the contact line with the Kiev forces in accordance with the new Minsk agreements.