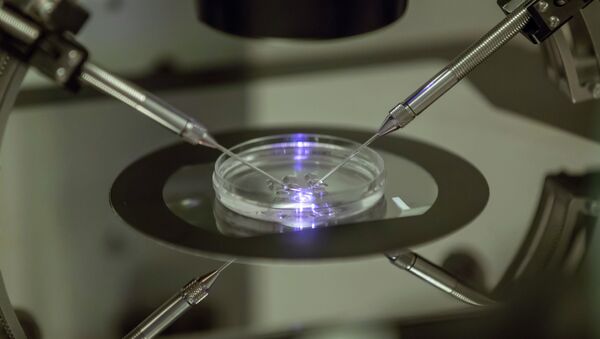 Britain on Tuesday is expected to become the first country in the world to legalise the creation of babies using the DNA from three people, with the House of Lords tipped to approve the proposal.

The House of Lords are widely expected to agree to the "mitochondrial transfer," of DNA, which would allow for the creation of 'three-parent babies' through IVF treatment.

This comes after the MPs in the House of Commons earlier this month voted overwhelmingly in favour of legalising the technique, which is included as an amendment to the 2008 Human Fertilisation and Embryology Act.

This new law means that if parents have faulty mitochondrial DNA, they can use the DNA from another person to replace the non-functioning mitochondria, so that the baby doesn't inherit disorders. Around 2,500 women in Britain are thought to be at risk of passing on mitochondrial disorders to their children.

Scientists at Newcastle University developed the mitochondrial transfer technique, which would see the baby inherit 20,000 genes from its mother that determines physical characteristics like height and hair colour.

However, the baby would also inherit 37 mitochondrial genes from a donor, which are used for energy production.

If the vote passes through the House of Lords, as expected, it's thought that the first baby conceived through such a technique could be born as early as next year.

Light at the End of a Dark Tunnel

During the House of Commons debate earlier this month, MPs said that allowing the creation of babies using the DNA of three people would provide some families with a "light at the end of a dark tunnel."

Prime Minister David Cameron also threw his support behind the decision and dispelled criticism of the approach, saying: "We're not playing god here, we're just making sure that two parents who want a healthy baby can have one."

The controversial technique has stirred up widespread debate in both Britain and around the world, with critics questioning what they consider to be a dangerous precedent in child conception.

Lord Carey should realise ‘three-parent’ babies are a dangerous experiment http://t.co/f6a0sbLXb0 via @TheConWom

Human genetics campaign group, Human Genetics Alert, are among those in opposition to the proposals set to be discussed by the Lords, with fears it could lead to "enhanced designer babies."

The Catholic Church and Church of England were also opposed to the mitochondrial transfer of DNA, citing the principal and safety concerns.

Despite the criticism, England's chief medical office Dame Sally Davies has urged the House of Lords to approve the historic law, saying that it would give people who suffer from mitochondrial conditions hope to have children.

She has also been supported by Dr Jeremy Farrar, Director of the Wellcome Trust, which funds the work of the team at Newcastle University.

"Families who know what it is like to care for a child with a devastating disease are best placed to decide whether mitochondrial donation is the right option for them. We welcome this vote to give them that choice, and we hope that the House of Lords reaches a similar conclusion so that this procedure can be licensed under the UK's internationally admired regulatory system."

The House of Lords will discuss the matter on Tuesday afternoon.