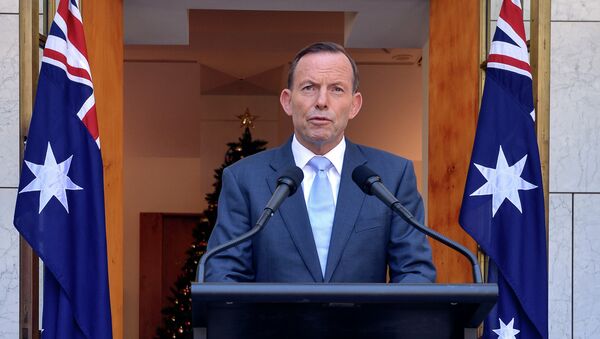 After having put off Indonesians by asking them to return AUD 1 billion which had been sent in 2004 for tsunami victims, the Australian PM on Monday admitted he thought about sending Australian troops to Ukraine.

Abbott Urges Indonesia to Spare Two Australians, Remember Tsunami Aid
Australian Prime Minister Tony Abbott told the country's parliament on Monday that there was truth to Australian media reports from August that he considered sending 1,000 Australian troops to Ukraine, as part of discussions with his Dutch counterparts in the days after Malaysia Airlines flight MH17 was shot down last year.

"There was talk with the Dutch about a joint operation," said Abbott, in response to a question from the opposition. "This arose out of the most important and the most necessary discussions between the Dutch military and our own," declared Abbott, adding that the idea was "not frivolous." Flight MH17 crashed in Ukraine in July 2014, resulting in the death of 38 Australian citizens; the investigation is ongoing.

The PM, when challenged during parliamentary Question Time, labelled as "absolutely fanciful" a media report of a proposal he'd made during a meeting to send 3,500 Australian ground troops to Iraq in a "unilateral invasion," an idea which came as an understandable shock to the country's military planners. The Australian newspaper which broke the news said "We stand by the story 100 percent."

Australia to Release Most Children in Immigration Detention Soon
Abbott's aptitude for speaking first and not thinking later was further demonstrated last week when he compelled Indonesians across the country to collect money in order to pay back the AUD 1 billion in aid Australia had sent to the country when it was hit by a tsunami in 2004. Last Wednesday,  Abbott, in an attempt to make a plea for clemency on the behalf of two Australian citizens who had been sentenced to death in Indonesia for drug smuggling, told the media "we will be making our displeasure known," if the executions go ahead, before referring to the aid package.

"Let’s not forget that a few years ago, when Indonesia was struck by the Indian Ocean tsunami, Australia sent a billion dollars' worth of assistance, we sent a significant contingent of our armed forces to help in Indonesia with humanitarian relief and Australians lost their lives in that campaign to help Indonesia."

"I would say to the Indonesian people and the Indonesian government: we in Australia are always there to help you and we hope that you might reciprocate in this way at this time."

Abbott's comments drew strong criticism in Indonesia, with the Jakarta Post reporting on Monday that people across the country were collecting coins to pay back Australia for its donation, while Twitter campaigns with the hashtags #KoinuntukAustralia, #coinforAustralia and #coinforAbbott were gathering pace. Banners in Jakarta read "We don't [need] no Australian education," and "Australians need a prime minister, not a Shylock and drug dealer's cousin." Campaign organizers said they would hand the money to the Australian government via the Australian Embassy in Jakarta.

On Monday, the Prime Minister extended his run of gaffes by attacking the President of the country's Human Rights Commission, telling the Australian parliament that Professor Gillian Triggs' report into the treatment of children in immigration detention published earlier this month is a "a political stitch up" that "will be called out by members of this government." The damning report found "numerous incidents of assault, sexual assault and self-harm in detention environments," and notes that the state is currently detaining about 800 children in mandatory closed immigration detention centers for indefinite periods.