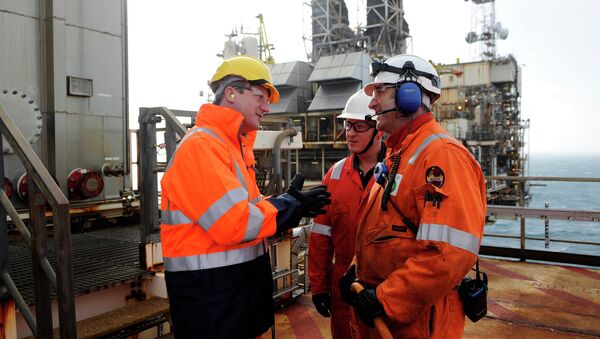 According to the report of Oil & Gas UK, revenues from exploration and production companies operating in the North Sea, United Kingdom, declined to $37 billion in 2014.

MOSCOW (Sputnik) – The British oil and gas sector needs more government support after rising costs, taxes and inadequate regulation made 2014 the worst year for the industry since the 1970s, Oil & Gas UK said in a report on Tuesday.

According to the industry's representative body, revenues from exploration and production companies operating in the North Sea declined to $37 billion in 2014. Due to rising costs, cash flow was estimated at $8.2 billion – the worst figure since the 1970s.

The body called for urgent action to secure new investment. It also said the government must ensure new exploration, as in the past year only 14 out of an expected 25 new wells were drilled.

‘Real Problem' Behind North Sea Oil And Gas Industry Is Not What You Think
"The basin needs sustained, high investment — £94 billion alone to recover the 10 billion boe in known reserves. This is why a concerted effort on three fronts is needed – tax, regulation and cost – to make the basin more attractive to investors," Oil & Gas UK chief executive Malcolm Webb said in the report.

Almost all UK oil and gas production comes from offshore fields. The United Kingdom has around 400 producing offshore fields, and continues to work on drilling new sites. Since the first extraction of oil and gas from the North Sea in 1964, the country has produced about 42 billion barrels of oil.

Untapped North Sea reserves are estimated to store up to 24 billion barrels of crude, according to the Oil & Gas UK.