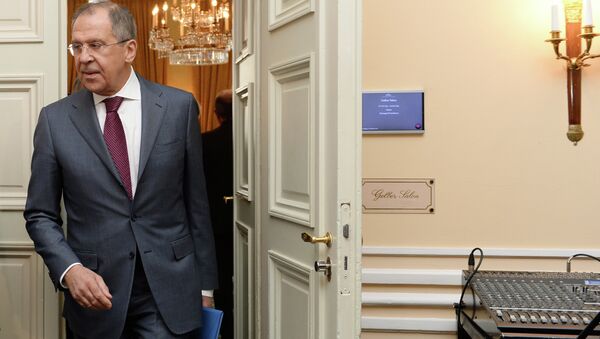 © AFP 2021 / CHRISTOF STACHE
Subscribe
Russian Foreign Minister Sergei Lavrov will meet with his Ukrainian, French and German counterparts at the French Foreign Ministry for the Normandy format talks on the Ukrainian crisis.

The foreign ministers of Ukraine, Russia, France, and Germany will meet at the French Foreign Ministry at approximately noon in Paris.

Lavrov arrived in Paris after his visit to New York for debates in the United Nations on the issue of international security.

The 13-point agreement stipulated a ceasefire from February 15, a buffer zone as well as the pullback of heavy weaponry by both sides from the line of contact.

The truce in Donbas entered in force as agreed in Minsk. Since then, both sides have accused the other of violating the ceasefire in particular areas. However, according to the OSCE monitors the ceasefire was generally holding.

On Monday spokesman for the Ukrainian Foreign Ministry Yevhen Perebyinis said that during their Paris meeting, the foursome of foreign ministers will focus on the implementation of the Minsk agreements and withdrawal of heavy artillery in Donbas.