US Deputy Secretary of State Blinken to Visit Ukraine March 6 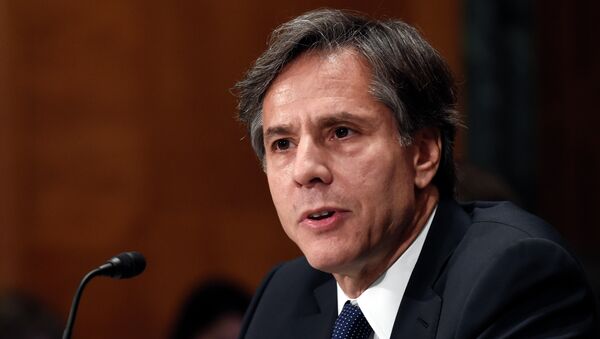 © AP Photo / Susan Walsh
Subscribe
US Department of State stated that US Deputy Secretary of State Antony Blinken will visit Ukraine as part of his trip to Europe next week.

WASHINGTON (Sputnik) — US Deputy Secretary of State Antony Blinken will visit Ukraine as part of his trip to Europe next week, according to a statement by the US Department of State.

“Deputy Secretary of State Antony Blinken will travel next week to France, Switzerland, the United Kingdom, Germany, and Ukraine,” the release, issued on Monday, said.

According to the statement, Kiev will be Blinken’s final stop on March 6, during which he will meet with senior government officials and civil society representatives.

The situation in Ukraine will be among the issues the Deputy Secretary will discuss with the government officials and non-governmental experts during his travel to each country, according to the statement.

The crisis in Ukraine escalated in April, when the Kiev authorities launched a military operation against independence supporters in eastern Ukraine, who refused to recognize the new Ukrainian government that assumed power through a coup last February.

Following months of bloodshed, the latest ceasefire agreement reached in Minsk came into force in eastern Ukraine on February 15.

Russia is one of the countries that has strongly supported a political dialogue between the warring sides, and mediated the latest and previous ceasefire agreements.