Former Ukrainian President Yanukovych Was Against Retaining Power by Force 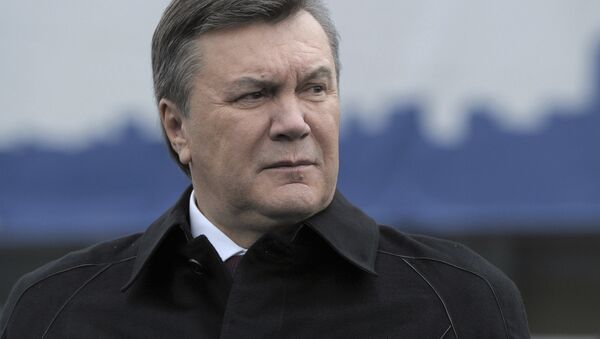 © Sputnik
Subscribe
Former Ukrainian President said that he was against retaining power by force during the uprising in the country.

MOSCOW (Sputnik) — Former Ukrainian President Viktor Yanukovych said that he was against retaining power by force during the uprising in the country a year ago, in an interview to Russian TV Channel One Monday.

A February 2014 government coup in Ukraine, that came after months of protests, forced then-President Yanukovych to flee the country.

“I was categorically against retaining power by force. I understood that if I started to raise protest people in fact to retain power, that this would be the beginning of a civil war,” Yanukovych said.

Yanukovych Claims Ideas of Returning to Ukraine 'Constantly' on His Mind
He stressed that he did not resign because wanted to organize constitutional process and to take into account the interests of all the Ukrainian regions.

“I have never thought that authority that has already received and had power in its hands, although illegally, well I did not think that they would after that start a war against its own people. It was nonsense,” the Yanukovych added.

The ex-president said that he never planned to leave Ukraine but the threat of attack on him was very clear.

“My decision to flee the country came along when we had all the signs that they [opposition] want to kill the president. And in such a way remove the problem of illegitimacy of the power,” Yanukovych noted.

The idea of returning to Ukraine and to lead a protest movement has been constantly on his mind, the former president said.

“As soon as I will have an opportunity to return, I will return and do everything in my power to make life easier in Ukraine. And today, of course, the main goal is to stop the war,” Yanukovych added.

The former president has repeatedly stressed the necessity to stop the war in his small motherland Donbas during the interview, naming it the primary task.

The protests led to military confrontation between Kiev forces and independence fighters in eastern Ukraine.