Iran Ready to Discuss US Proposal to Reduce Number of Centrifuges to 6,500 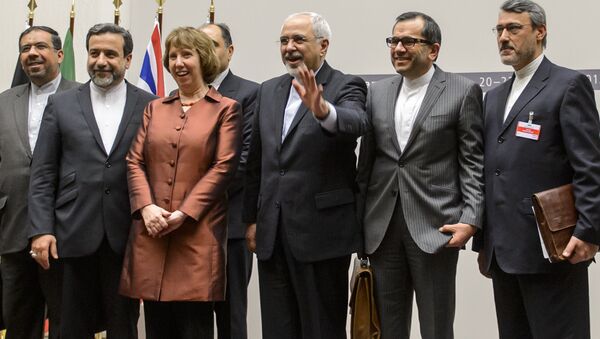 © AFP 2021 / FABRICE COFFRINI
Subscribe
Tehran and Washington are "slowly bringing their positions togethers" in talks on Iranian nuclear program, according to a source in the Iranian delegation.

After 'Constructive Discussion,' US & Iran May Be Closing on Nuclear Deal
GENEVA (Sputnik) – Tehran is ready to consider and discuss a US proposal to reduce the number of its nuclear centrifuges amid the negotiations on the Iranian nuclear program in Geneva, a source in the Iranian delegation told RIA Novosti.

"This suggestion was put forward by the American delegation. This proposal completely suits the interests of Washington; in turn, Tehran is ready to consider and discuss this in the future," the source said.

According to the source, the "sides are slowly bringing their positions together."

"The presence of the head of Iran's Atomic Energy Organization Ali Akbar Salehi at the talks sped up the negotiation process," the source stated.

Iran, US Delegations Finish Talks Over Tehran’s Nuclear Program
Earlier in the day, the Iranian and US delegations wrapped up talks on Tehran's nuclear program in Geneva. Over the past two days, the delegations headed by top diplomats met three times and some gaps appear to have been narrowed.

The UN Security Council and a number of countries have accused Iran of trying to develop nuclear weapons. Tehran has repeatedly rejected those claims, stating that its uranium enrichment program is for peaceful purposes only.

Iran and the P5+1 group have held several rounds of talks on Tehran's nuclear program in recent years with limited results. A long-term agreement has to be reached by July 2015.