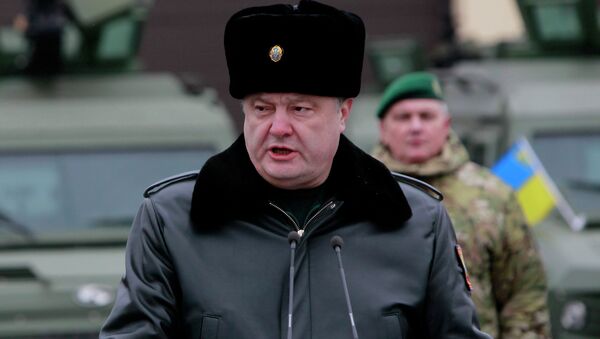 In a pair of tweets published after 2am Monday morning, Poroshenko stated that "Ukraine will regain control of occupied Crimea," noting that "this is inevitable," and promising that "Ukraine will never give up its sovereign rights" to the region. Moreover, the president stated that Ukraine would "protect [the] rights of its people with all available means," and that "together we will build a new Crimea."

On his administration's website, the president added that "our government will not recognize the result of this worthless act under any circumstances," referring to the March 2014 referendum in which Crimeans voted overwhelmingly to join Russia.

Ukraine will never give up its sovereign rights to Crimea. We will protect rights of its people with all available means.

Ukraine will regain control of the occupied Crimea. This is inevitable, and together we will build a new Crimea.

Poroshenko's comments, appearing just a few hours after the one-year anniversary of the Maidan coup, sparked a small comments war on his Twitter account. Users pointed out a number of problems with the president's comments. One tweeted that Poroshenko knows "full well [that] the Crimeans don't need this," while another asked rhetorically about whether the president would carry out his pledge "even if the Crimeans themselves don't need your 'protection'?"

Others urged the president to "fix the economy" instead of going "and [starting] another war," while others still noted the dissonance between the president's statements and his government's actions in relation to Crimea. One user asked why the president supports "the imposition of sanctions against Crimeans," including the decision to "turn off the electricity grid and communications," and rhetorically concludes: "This is how you call on Crimea to return home?"

"Except as you know full well, the Crimeans don't need this."

The people of #Crimea expressed their SOVEREIGN OPINION at the referendum and showed their will to be back home to #Russia. @poroshenko

"Then why do you support the imposition of sanctions against Crimeans? Why do you turn off the electricity and communications? This is how you call on Crimea to return home?"

Crimean Prime Minister Sergei Aksyonov sharply rebuked Poroshenko's comments on Monday, stating that the president would face a tribunal in Crimea. "He was promised a Crimean tribunal, and it will come to pass. We will bring him here and try him. Crimea will never return to Ukraine. Crimea has returned home, to Russia, forever," Aksyonov noted.

In a referendum vote organized by local authorities in mid-March 2014 amid growing instability in post-coup Ukraine, including threats against the Russian-speaking population, Crimean authorities organized a referendum on the peninsula, where an overwhelming majority of Crimeans voted to return to Russia following a little over 60 years as part of Ukraine.