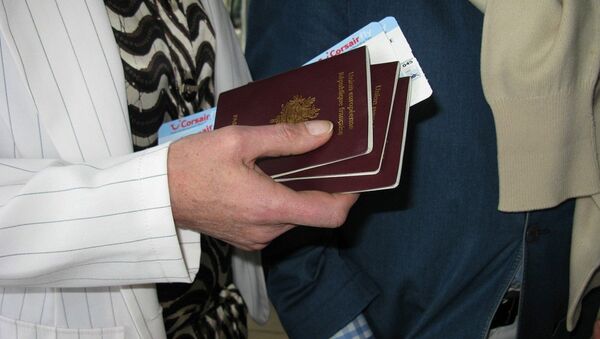 Six suspected jihadists had their passports and ID cards taken away by French authorities to prevent them from travelling to join Islamic State militants group.

Islamic State to Systematically Target Europe in 2015: French Expert
MOSCOW (Sputnik) — Six suspected jihadists have had their passports and ID cards taken away to prevent them from travelling to Syria in what is the first time that French authorities have used their new anti-terror powers, RTL radio reported Monday.

RTL said French intelligence services were alerted to the men's plans to join the Islamist cause by their relatives, while others had been watched by the Interior Ministry's intelligence agency DGSI.

All six have been deprived of their passports for six months, although they can appeal this decision in court. RTL explained that the ID cards were withdrawn to prevent them from travelling to Turkey, which is frequently used by would-be jihadists as a gateway to Syria.

Some 40 similar cases are also being investigated, RTL said citing a security source.

French Muslims Still Joining Terror Cells Despite Harsh Anti-Terrorist Laws
Syria has been struggling with the Islamic State (IS) insurgency since 2012. But it was only in 2014 that the group attracted global attention after making swift advances in northern Syria and spilling over into western Iraq.

The IS has since been rallying foreigners under its banners, including at least 3,400 Westerners, according to the US National Counter-Terrorism Center estimates.

Last November, the French parliament adopted a law that prohibited French citizens from going abroad to fight alongside jihadists, specifically in Iraq and Syria where the IS has a strong presence.

Fears that home-grown terrorists and those returning from Syria may threaten France's home security were raised again after a string of terror attacks last month, when 17 people were killed by Islamist gunmen in and around Paris.