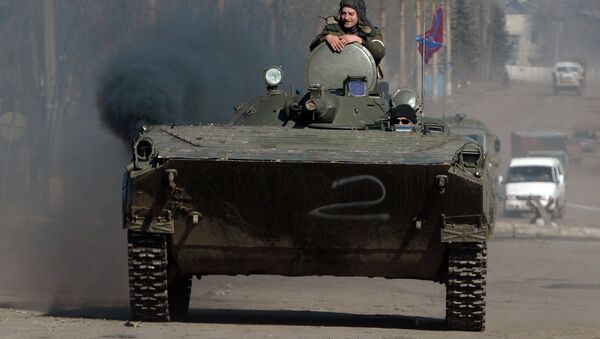 Eastern Ukraine's self-proclaimed Luhansk People's Republic's independence supporters are pulling its heavy weaponry out from the line of contact with Kiev troops.

Kiev to Withdraw Artillery Only When Ceasefire Holds
MOSCOW (Sputnik) – Eastern Ukraine's self-proclaimed Luhansk People's Republic's militia has confirmed that it is pulling its heavy weaponry out from the line of contact with Kiev troops, in compliance with the Minsk agreements, an LPR negotiator told RIA Novosti Monday.

The ceasefire deal between independence militias and the Ukrainian government forces entered into force on February 15. Under the deal, the sides must withdraw heavy artillery from the line of contact.

"We are withdrawing," Vladislav Deinego, said in a phone conversation.

Deinego also said that the ceasefire in Donbas is being generally observed, but single mortar shots are occasionally heard.

On Sunday, deputy commander of the DPR militia, Eduard Basurin, said the withdrawal of heavy artillery in east Ukraine's Donbas region will start on Tuesday, February 24.