Thousands of Japanese Stage Protests in Okinawa Against US Base Relocation 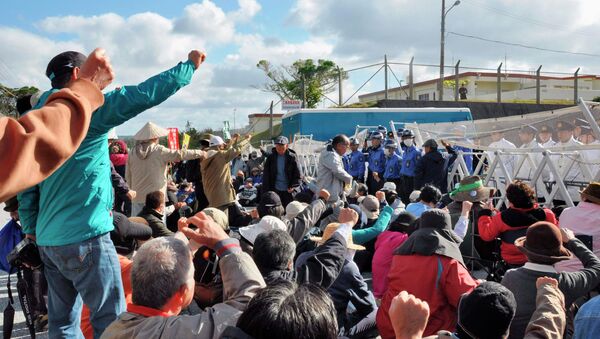 © REUTERS / Kyodo
Subscribe
Protesters have gathered in Japan's southern Okinawa Prefecture to protest against the planned relocation of the US Marine Corps Air Station Futenma to Nago city.

Japanese Authorities Crack Down on Okinawa Protests Near US Military Base
MOSCOW (Sputnik) – Over 3,000 people have gathered in Japan's southern Okinawa Prefecture to protest against the planned relocation of the US Marine Corps Air Station Futenma to Nago city, NHK World News reported Monday.

The Japanese authorities' decision is opposed by local environmentalists, who argue that the base would harm flora and fauna in the area and by civic groups, critical of an American military presence in Nago city.

On Sunday, protesters staged a rally outside the gate of a US military base next to the relocation site in Nago. According to NHK, Nago city mayor Susumu Inamine urged residents of Okinawa to unite against the US base construction project.

Earlier in the day, two members of a civic group were arrested as they tried to trespass on to the US base. In response, about 300 people gathered near the Nago police station, calling for their release, NHK said.

The relocation plan was agreed in 1996, but most Nago residents voted against the plan in a referendum.

In December 2013, Okinawa Governor Hirokazu Nakaima granted permission to the building of a new US military base in Nago, approving the Japan's authorities landfill proposal. His decision resulted in rallies across the country.

To date, the future of the relocation of the US military facility is uncertain as Okinawa's new governor Takeshi Onaga opposes the project.