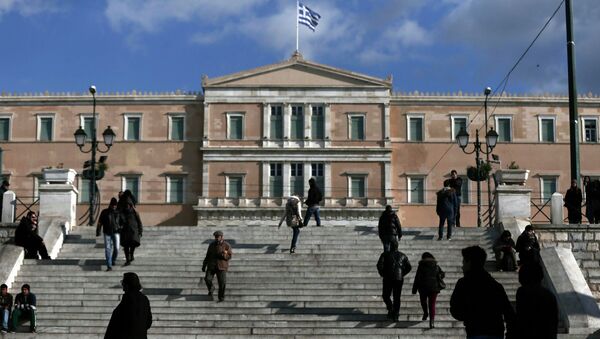 Greece will inevitably draw closer to Russia in case of its withdrawal from the monetary union and will provide Russia a good opportunity to extend its influence in the Balkans, the German newspaper “Frankfurter Allgemeine Zeitung” writes.

Greece’s exit from the eurozone could lead to the establishment of very close relations between the two countries and contribute to the expansion of Russian influence in the Balkans, “Frankfurter Allgemeine Zeitung” reports.

Greece Confirms Loan Extension Request to Eurozone
With a Greek exit from the monetary union, its membership in the Schengen area and the EU will also be quickly called into question, the newspaper writes. The withdrawal of the country from the eurozone may lead to mistrust and lack of solidarity among the remaining countries and “this is a significant burden for the association, which is based on partnership,” according to the article.

A potential exit of Greece from the EU also may have serious strategic consequences.  Greece will start looking for new partners and the first candidate would be Russia. “Russia has money, interest in the Balkans, and there is a cultural proximity between the two orthodox countries,” the author claimed.

According to the newspaper, rapprochement between Greece and Russia will also result in difficulties for NATO. It may become more problematic for the allied forces to strengthen its presence in Eastern Europe if Athens will express its opposition.