Italy Takes in Influx of Migrants as Violence Engulfs Libya 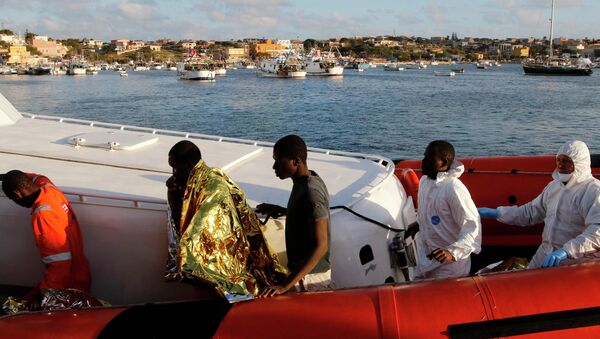 © REUTERS / Antonio Parrinello
Subscribe
Migrants had to pay as much as $1,500 to get on a boat to Italy.

Approximately 4,300 migrants have arrived in Italy since the start of February; the majority coming from war-torn Libya, where militant groups including the Islamic State are increasingly active.

One of those, who were fortunate enough to make it safely to the Italian island of Lampedusa, told staffers with the International Organization for Migration (IOM) that living conditions in Libya were dire. "Even my enemy – I would not want him to come to Libya," said a teenager from Guinea Bissau. He also spoke of constant abuse at the hands of people, who forced him to work on construction sites.

Migrants, who mostly came from Eritrea, Somalia, Nigeria, Palestine and Syria, had to pay as much as $1,500 to get on a boat to Italy. Some of them spent two years in Libya waiting to be transported to Europe.

IOM staffers have interviewed dozens of #migrants from this week’s arrivals from #Libya, mostly African.

"Testimonies confirm that smugglers are increasingly violent with migrants, at the departure points and when they hold them in so called ‘connection houses’ before their departure, where they wait for days or weeks before embarking," said  Federico Soda, heading the IOM Coordinating Office for the Mediterranean in Rome.

EU to Extend Italian Border Control Operation Amid Migrant Flow
Migrants, who were rescued this week, described the security situation in Libya as perilous, saying it was too dangerous to stay in Tripoli. Conditions in the country may worsen, Soda warned.

On Friday, more than 45 people were killed in triple explosion that rocked the city of al-Qubbah. A group, affiliated with the Islamic State took responsibility for the attack.