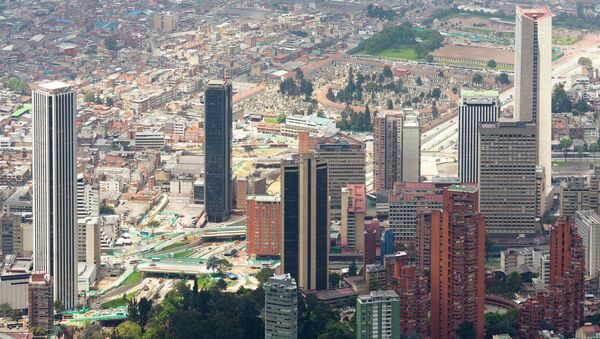 © East News / Radius Images
Subscribe
US Department of State Secretary John Kerry announced on Friday the appointment of Bernard Aronson as a special envoy to help with Colombia’s peace negotiations between the Bogota government and the Revolutionary Armed Forces of Colombia.

WASHINGTON (Sputnik) — The United States named Bernard Aronson as a special envoy to help with Colombia’s peace negotiations between the Bogota government and the Revolutionary Armed Forces of Colombia (FARC) rebel group, US Department of State Secretary John Kerry announced on Friday.

“With courage, with determination, with a just and lasting commitment to peace, we think that the courage shown by President [Juan Manuel] Santos and the people of Colombia in pursuing these talks could actually find a resolution,” Kerry said. “With the help of Special Envoy Aronson, the United States is going to continue to stand by Colombians’ side in this journey.”

FARC Releases Colombian General in Order to Secure Peace Negotiations
Aronson served as US Assistant Secretary of State for Inter-American Affairs from 1989 to 1993.

The appointment comes after President Santos asked Kerry in December for the US to take part in more direct and supportive role in Columbia’s peace process, to end a conflict that has lasted “longer than most Columbian’s have been alive,” Kerry said.

The Secretary added that US President Barack Obama agreed with the decision.

“We know that if the parties were able to reach an agreement, if they could finally bring peace to a country that has seen war for decades now of internal conflict, this would unleash enormous potential for the Colombian people and it would have an impact throughout Latin America and perhaps even beyond,” Kerry said.

In January, President Santos said that his government was ready to enter talks with after the rebel group announced an indefinite unilateral ceasefire and urged the government to stop fighting during the talks.

Special Envoy Aronson stressed that peace in Columbia could only be achieved by “Colombians themselves,” and that Washington would not “take a place at the negotiating table,” but would help from the sidelines where they could.

Colombia’s government has been engaged in talks with FARC since 2012 in an attempt to put an end to a standoff that dates back to in 1964. Estimated 220,000 people, mostly civilians, have been killed in the decades-long armed conflict in Colombia.