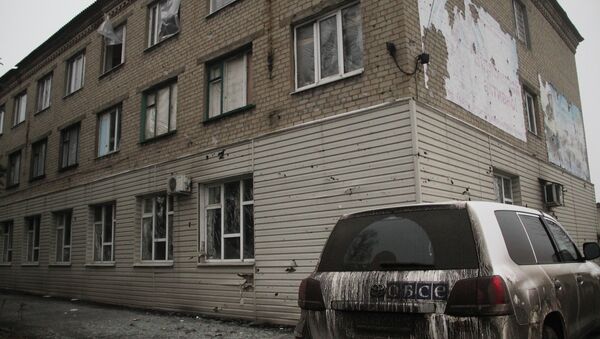 © Sputnik
/
Go to the photo bank
Subscribe
Parliamentarians from more than 50 OSCE member states discussed the Ukrainian crisis on Friday.

Sending Peacekeepers to Ukraine Up to Security Council – Ban Ki-moon
MOSCOW, February 20 (Sputnik) — Parliamentarians from more than 50 Organization for Security and Cooperation in Europe (OSCE) member states discussed the Ukrainian crisis on Friday, focusing on the recent clashes in the city of Debaltseve and possible deployment of international peacekeepers in eastern Ukraine to complement the OSCE monitors’ work.

"As lawmakers from the OSCE's 57 states we must be vocal and unequivocal in furthering the goal of peace in and around Ukraine. With every rocket launched, hope for a diplomatic solution grows dimmer," OSCE Parliamentary Assembly President Ilkka Kanerva said as quoted by the OSCE website.

Kanerva also asked the parliamentarians to consider possible deployment of international peacekeepers to Ukraine, who could complement the work of the OSCE monitors in the region.

The lawmakers expressed hope that recent clashes in the Debaltseve area would not bring an end to the Minsk agreements, reached by the international mediators earlier this month.

Head of the Russian delegation Alexei Pushkov said that Russia cannot be the only country responsible for the implementation of the Minsk agreements, urging the conflicting sides to stick to the peace plan.

On February 12, the leaders of Russia, Ukraine, Germany and France agreed on a set of measures aimed at stopping the military confrontation between Kiev forces and independence supporters in eastern Ukraine. The measures, among other points, stipulated a ceasefire that came into force on February 15, an all-for-all prisoner swap and withdrawal of heavy artillery from the line of contact.