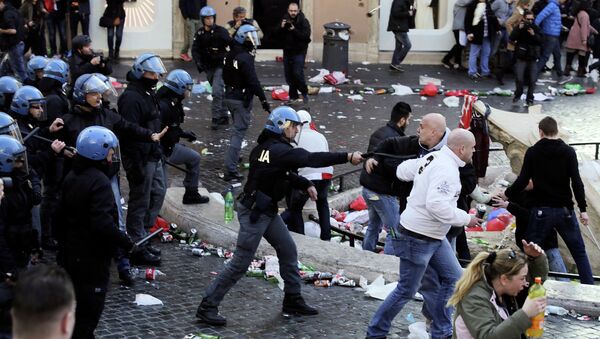 Hundreds of fans, many of whom were drunk, threw smoke bombs and bottles at a large contingent of police close to the Spanish Steps in central Rome.

Fans of Dutch football club Feyenoord clashed with riot police in Rome ahead of their team’s Europe League match against Roma on Thursday night, media reported.

Hundreds of fans, many of whom were drunk, threw smoke bombs and bottles at a large contingent of police close to the Spanish Steps in central Rome. Some of Feyenoord’s traveling supporters were injured.

Disappointing to see #Feyenoord fans clashing with police in #Rome #FeyenoordinRome in the #EuropaLeague pic.twitter.com/KknXLMNqpt

The police reacted by charging them and clearing the square before escorting them onto buses to the Olympic Stadium.

Six police officers required medical attention and the 17th century Fountain of Old Boat at the bottom of the Spanish Steps was damaged.

After the clashed the square was covered with cans, bottles and other glass. Many of the shops in the area closed.

Italian police said they arrested six Dutch nationals on Wednesday night and confiscated truncheons and broken bottles. According to judicial sources, a further 17 people were arrested on Thursday.

About 6,500 Feyenoord travelling supporters were expected to attend the match.

Ignazio Marino, mayor of Rome, tweeted that the city was "devastated and hurt" by the clashes at one of the city’s most beautiful locations.

"I am seriously angry. What is happening is unacceptable. We are in contact with the authorities and the Dutch Ambassador. It will not end here. I protested and demanded an explanation from those who are responsible for public order in this city," he added.

The Dutch embassy in Rome said in a statement that there was "no place for violence in football" and that it would work together with Italian authorities to punish those responsible.

Italian Prime Minister Matteo Renzo said in a TV interview that he appreciated the message of the Dutch embassy and would take the issue to European football authorities.

Rome’s public works department said its staff was sent to clean the recently restored Barcaccia fountain. Technicians will now assess what damage has been done to it.

@Feyenoord_int If you could keep your beasts away from Italian monuments, that'd be great #FeyenoordinRome pic.twitter.com/rQxH3msQuF

On Friday, Italian opposition leaders demanded to remove from post country's Interior Minister Angelino Alfano amid the violent clashes. According to Roberto Calderolli, a leading member of the Northern League, if public order in central Rome can be violated by a group of drunk vandals, those responsible for maintaining it should leave office.