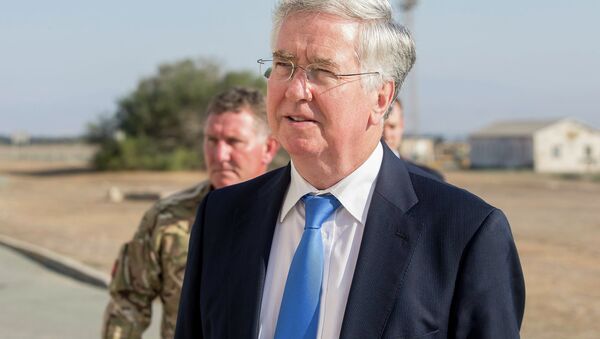 British military experts have poured scorn over the UK Defence Secretary's claim that the Baltic States could be the next targets for Russia. The news comes as senior British parliamentarians accused the EU of "sleep-walking" into the current crisis in Ukraine.

The British Defence Secretary Michael Fallon suggested that the former Soviet states of Latvia, Lithuania and Estonia could be next to face a Russian-backed campaign to destabilise them.

Flying on the Edge: British Media Abuzz Over Russian Bombers
Fallon's comments came after another two British RAF fighter jets were scrambled to intercept two Russian bombers close to UK airspace. Fallon said this was a further example of Russia testing NATO's capabilities in Europe, following the crisis in Ukraine.

He said that previous sorties into NATO territory proved that Russia could even flex its muscles in the Baltic states of Latvia, Lithuania and Estonia.

Fallon told journalists: "It's a very real and present danger. He [President Putin] was testing NATO all last year, if you look at the number of flights and the maritime activity.

Russia was quick to rebut Fallon's claims. "The person who could say this is unlikely to understand what kind of substance he is talking about," Russian presidential press secretary Dmitry Peskov said.

Fallon's comments have been met with derision among academics and military experts in Britain, who say his comments show a lack of knowledge of NATO capabilities.

Sarah Lain, a Research Fellow at the UK's Royal United Services Institute, told Sputnik: "I think it's probably missing the point. There's lots to look at in Ukraine, and the likelihood of that spreading to the Baltic States is probably a risk too big for Russia.

"In NATOs' view, they've never said to Ukraine ‘you will be a member'. Similarly, this thing happened with Georgia; there was never any promise of membership. Russia has had this historical narrative about NATO enlargement and encroachment on their backyard."

EU, UK ‘Sleep-Walk’ Into Ukrainian Crisis – House of Lords Committee
Historically, NATO — heavily backed by the United States — has sought to spread its influence further eastward, despite an agreement after the reunification of Germany, that it would not encroach on the former Warsaw Pact nations. At the time, former Russian President Mikhail Gorbachev was assured by (then) US Secretary of State Baker there would be "no extension of NATO's jurisdiction one inch to the east".

Lain told Sputnik: "This is about Ukraine. I think the Baltic States aren't really the point. It's also part of NATO's examination of itself. It's suddenly become much more relevant than it was, because of what's going on in Ukraine. So it's a lot of talk from NATO about how it's very important to European security, which is true, but it hasn't really updated itself in line with what's happened since it was formed."

Her comments come on the day the British House of Lords issued a report saying the European Union had totally misunderstood the situation in Ukraine, when it started negotiations with Yanukovich over joining the EU which precipitated the Maidan protests and led to the western-backed Poroshenko government seizing power in Kiev.

The House of Lords European Union committee said: "there has been a strong element of ‘sleep-walking' into the current crisis, with Member States being taken by surprise by events in Ukraine."

"In the long term, the EU, Member States and Russia must learn to live with each other as neighbours, as important players in the United Nations, and as regional powers. Dialogue between the EU and Russia has to be maintained, particularly on the many issues of shared strategic interest, such as a common economic space and a new European security architecture. The EU should also develop a coherent policy approach towards the Eurasian Union," the report said.