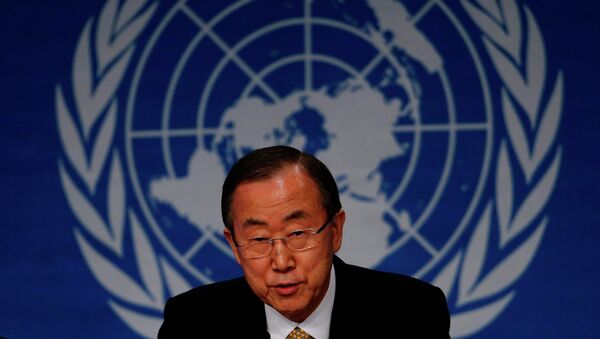 © REUTERS / Arnd Wiegmann
Subscribe
UN Secretary-General Ban Ki-moon said that the fight against the extremists' groups such as the Islamic State and Boko Haram lacked basic elements of due process and respect for the rule of law.

“Time and again we have seen that the most effective recruiting agents for extremists are the very actions taken against them. All too often, counter-terrorism strategies lack basic elements of due process and respect for the rule of law,” Ban said.

Military strategies, while crucial to confront “real threats”, are alone not enough to curb terrorism, the UN chief stated.

Jihadist in Latest ISIL Beheading Video Could Be American - US Media
An international US-led coalition has in recent months been carrying out airstrikes against Islamic State militants in Syria and Iraq, though without the Syrian government's approval.

“We must remember that missiles may kill terrorists, but good governance kills terrorism,” Ban said, underlining that violent extremism is not a regional issue, and requires a global all-round approach.

To prevent terrorism, one must get to the roots of it, the UN chief said, noting that looking for motivations behind extremism is a “notoriously difficult” task.

“Yet we know that poisonous ideologies do not emerge from thin air,” he added.

The UN leader made his remarks at the Summit on Violent Extremism in Washington, and said a multi-stakeholder plan of action would be presented to the UN General Assembly later this year.