US Vets Addicted to Opioids Should Try Alternative Treatment - Physicians 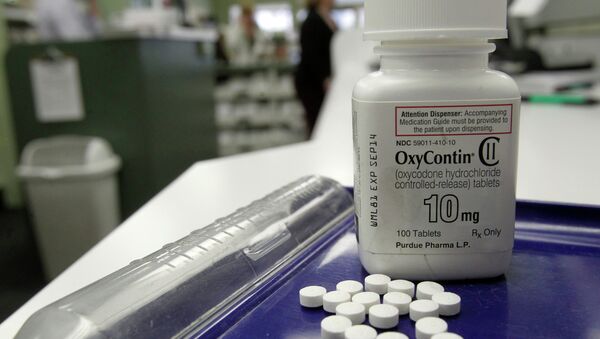 © AP Photo / Toby Talbot
Subscribe
The Vice President of Physicians for Responsible Opioid Prescribing said for US citizens suffering from addiction to opioid painkillers, the treatment could be replaced by alternative drugs or reducing the doses of opioids to safer level.

Army Gives First Ever Go-Ahead on Hormone Therapy for Chelsea Manning
MOSCOW (Sputnik), Alexander Mosesov — US citizens suffering from addiction to opioid painkillers, including the country's veterans, should taper off opioids, switching to alternative medication, the Vice President of Physicians for Responsible Opioid Prescribing told Sputnik on Thursday.

Drug overdose death rates in the United States more than doubled in the period from 1999 to 2013, Centers for Disease Control and Prevention (CDC) data says.

"If opioids are causing more problems than they are helping, it is possible for some patients to gradually taper off opioids successfully," Michael Von Korff said in relation to those of the US veterans facing painkiller addiction.

Von Korff continued by saying that opioid painkiller treatment could be replaced by alternative drugs or reducing the doses of opioids to safer levels.

He also added that there are "areas and providers where opioids are being prescribed and dispensed irresponsibly, resulting in much larger quantities of these drugs getting into distribution."

US Physicians Should Follow Europe's Example on Selective Opioids Usage

On Wednesday, the Washington Post reported that many US veterans face problems receiving treatment following the 2014 restrictions on opioid medications by the country's Drug Enforcement Administration (DEA).

"We should be moving back in the direction of countries in Europe that use opioids more selectively and conservatively," Michael Von Korff told Sputnik.

He explained that US physicians are prescribing opioids for long-term chronic pain management "substantially more than physicians in European countries."

Von Korff agrees with the position of DEA, acknowledging that fatal overdose and addiction rates in the United States have increased dramatically in recent years.

According to the Centers for Disease Control and Prevention (CDC) data, drug overdose death rates in the country more than doubled in the period from 1999 to 2013.