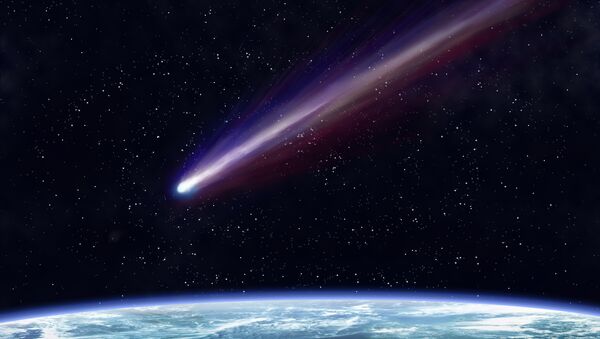 © Fotolia / Paul Fleet
Subscribe
The Earth’s movement through the Milky Way might explain dramatic changes in the planet's ecosystem and geosphere, a new study suggests. In short, blame dark matter.

'Christians Against Dinosaurs:' Parents Want Dino “Lies” Out of Schools
Biology professor Michael Rampino of the New York University asserts that roughly every 26-30 million years the Earth suffers from a massive extinction event, killing up to 90 percent of all terrestrial life forms. Dinosaurs became extinct 66 million years ago in one such event, once known as the Cretaceous-Tertiary extinction.

Abnormal volcanic activity, including volcanic eruptions, mountain formation and dramatic changes in sea levels, peak at approximately the same interval, according to the researcher.

Rampino asserts that dark matter might be the reason for that. The enigmatic substance is believed to make up as much as 26 percent of all matter in the universe but it cannot be seen and has not been observed. It only interacts with the atomic matter, long familiar to us, through gravity.

Dark matter is concentrated in the disc of our home galaxy. Approximately every 30 million years the Sun and the planets revolving around it pass through the disc interacting with dark matter. Its particles get accumulated in the Earth’s core and subsequently annihilate, heating the core. This then leads to intense geological activity.

Additionally, when the Sun passes through the galaxy disc, it causes a disturbance in the Oort cloud, a belt of icy bodies surrounding the Solar System, believed to harbor millions of comets. Affected by the Galactic tidal forces, some of them are set on a collision course with the Earth, the researcher pointed out.

"These results suggest that cycles of geological and biological evolution on the Earth may be partly controlled by the rhythms of Galactic dynamics," Rampino said in the paper, published in Monthly Notices of the Royal Astronomical Society.