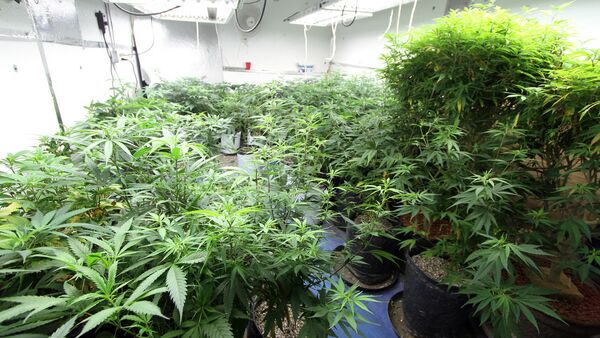 Police discovered a large cannabis plantation in Switzerland after an incident between drug dealers on Sunday.

In the continuing failed war on drugs, Swiss police raided a huge cannabis plantation after a skirmish between the members of drug gangs on Sunday during which two were wounded.

According to ATS, on the plantation were growing several thousand cannabis plants and was a large-scale professional operation. Lately, the number of such operations has grown. For instance, last year police found 70 plantations in St. Gallen. This was almost four times more compared with figures in 2013. Earlier this month in Zurich a plantation of 10,000 plants was discovered.

Legalization of Cannabis Farming Proposed By Lebanese Agriculture Minister
By making the plant illegal, the Swiss government has created a bootleg market where criminals and other thugs can take hold. The shooting incident in Altstätten, a canton of St. Gall, was more proof that illegal growers will use any means to protect their investment, even violence.

For cannabis dealers, Switzerland is very profitable place due to the amount of money drug buyers are ready to spend: “For one gram of marijuana consumers pay from eight to ten francs. Cannabis is a multi-billion dollar deal,” Eugen Rentsch, director of St Gallen police’s narcotics department told Blick.

Grass Roots: New Party Wants Overhaul of British Drug Laws
Foreigners also try to profit on it: “Groups from the Balkans, which are already occupied in the drug market and now dispersing in the grass business,” Rentsch said. Today's indoor plantations are spreading quickly: “The quality of these indoor products is very good, the THC-content is high,” wrote Blick quoting Eugen Rentsch.

The amount of marijuana consumers in Switzerland averages from 50,000 to 100,000, according to Frank Zobel of Addiction Switzerland.
“Cannabis is the most consumed illegal drug in Switzerland,” claimed Christian Schneider, analyst at the Federal Criminal Police to Blick.
The cultivation, trade and consumption of cannabis in Switzerland are illegal. However, the possession of less than 10 grams of cannabis is considered a minor offence and presumes just a fine.

Last year the creation of special areas where cannabis could be legally consumed was proposed.