EU Reeling Between US and Russia 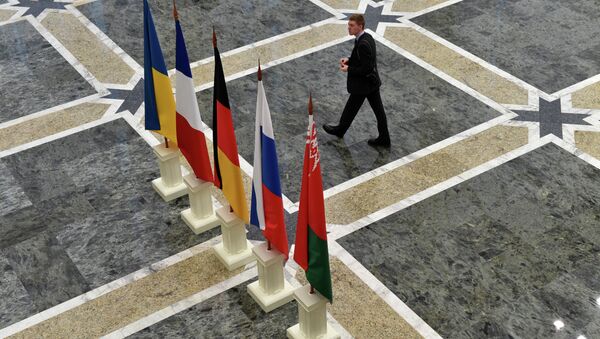 Pepe Escobar
All materials
Minsk 2.0 agreement de facto shows that Germany and France, the leading European powers are trying to break away from the "American Chaos project."

Minsk Agreement Poses Serious Challenge to Poroshenko - Schröder
Washington has certainly succeeded in permeating an already embattled EU with a little extra – what else – chaos, by pitting the “West” against Russia.

The Obama administration – infested with neo-con cells, those ghosts inside the machine – have always believed that a package of Western sanctions plus a Saudi-unleashed oil price war would be enough to bring down the Russian economy, thus “changing its behavior” on Ukraine, and in the best scenario provoking regime change in Moscow.

Well, it’s not working. Minsk 2.0 – as fragile an agreement as it is – de facto shows Germany (assisted by France), the leading European powers, trying to break away from the American Chaos project.

The Empire of Chaos does not want a lasting agreement on Ukraine – and will do everything to torpedo Minsk 2.0. NATO’s strategic imperative remains clear; force Moscow into a war in Ukraine to exhaust it economically, prevent a EU-Russia economic/trade partnership, and eliminate Russia as a global competitor to the US.

The oil price war, for its part, is also not going swimmingly anymore. Neo-cons are actually desperate; they’ve seen how the Saudi strategy is killing the US shale oil industry.

Now they are not saying out loud they want an oil price rise to help Russia; but rather to keep killing Russia with low prices while the US reaps the gains by imposing a protectionist tariff. As the neo-cons see it, this way they will also kill Saudi Arabia and Iran. And this scheme was not even concocted by notorious Russophobe Dr. Zbig “Grand Chessboard” Brzezinski.

Don’t You Step on My Loaned Suede Shoes

German Lawmakers Claim Ukraine Conflict Covers Up Massive Cropland Seizures
If geopolitically and in the energy sphere the Empire of Chaos is facing trouble, all’s fine and dandy in the realm of disaster capitalism. Thanks, once again, to the IMF.

The IMF in Ukraine has been perpetrating the same devastation recently unleashed on Greece or Ireland, or across the Global South as a whole since the 1970s. Dreaded “structural adjustment” still applies – complete with an array of savage privatizations starring Western “investors” embedded with local oligarchs. That includes, of course, land grabs facilitated by IMF loans.

The $17 billion IMF loan that was miraculously produced on the eve of Minsk 2.0 not only allows the oligarchs in Kiev to keep prosecuting – by proxy – an Empire of Chaos war against Russia. It came with a key conditionality; Ukraine must imperatively be ravaged by hardcore biotech farming. And what a fabulous agricultural prize; Ukraine is the world’s third largest exporter of corn, the fifth largest exporter of wheat, with a deep, rich, black soil where anything, literally, can grow. The winners, predictably, will be the usual corporate GMO suspects – from seed producers Monsanto and Dupont to farm equipment dealer, Deere.

Michael Hudson has conclusively tracked this path of turbo-neoliberalism run amok; and yes, just like in the recently orchestrated run on the ruble, “finance is the new kind of warfare”, with “finance and forced sell-offs in a new kind of battlefield.”

Legally, IMF head Christine “look at my new Chanel” Lagarde, also currently involved in perpetuating Greece as a “debt colony” (in the words of Greek Finance Minister Yanis Varoufakis) would not know how to justify the IMF making billionaire loans to an Ukraine plunged into civil war, and on top of it completely broke.

BRICS Development Bank to Function by End of 2015 - Russian Official
But Madame Lagarde actually does not run the show; secretive Masters of the Universe in the Washington/Wall Street axis do.

EU out, BRICS and SCO in

The Empire of Chaos certainly has reasons to gloat about the nasty split between the EU and Russia. Moscow’s working hypothesis is that sanctions won’t vanish anytime soon. And forget about “business as usual” anytime soon. Germany’s captains of industry are not amused.

And yet, if only a few years ago President Putin was proposing — in Germany — a wider Europe from Lisbon to Vladivostok, the Ukraine tragedy has in fact turbocharged a “Go East” move; the Russia-China strategic partnership, a sort of prime Eurasia from Shanghai to St. Petersburg that also happens to be one of the touchstones of the massive Chinese-driven New Silk Road(s) infrastructure project, linking China to Europe via Central Asia and also via a high-speed rail upgrade of the Trans-Siberian.

The myth of Russia’s “isolation” propelled by Washington and its vassals is a joke. An Empire of Chaos-imposed Cold War 2.0 is not the end of (Russia’s) world. Russian diplomacy is active on all fronts – from South Asia (India) to the Middle East (Egypt). This summer, Russia will host two crucial summits: the BRICS and the Shanghai Cooperation Organization (SCO).

The BRICS keep advancing their push for a multipolar world — from the implementation of a development bank to trading in their own currencies. The SCO will soon welcome India and Pakistan as members, and in the near future, Iran – solidifying itself as an Asian political/economic alliance.

The Empire of Chaos’s obsessive agenda precludes any benefits for the EU. Apart from Gazprom, Russia has been sidelined as a trade partner – at least in the near future. And there’s not much the EU may profit from Ukraine; it won’t fork out a single devalued euro to “save” it from  bankruptcy, and it won’t play with fire by facilitating its incorporation by NATO. I have argued it all depends on Germany. Business Germany wants to do business with Eurasian powers Russia and China. Political Germany is still wondering where its strategic priorities lie.

Diplomats in a split to the core Brussels, off the record, have hinted Moscow sent a clear message. Either everyone embarks on a Chinese-style “win-win” situation, from Lisbon to Vladivostok; or the EU blindly follows the Empire of Chaos, chooses confrontation in Ukraine, and receives as a poisoned gift a war in its eastern borderlands it cannot possibly win.