Merkel Seeks to 'Make Peace' in Europe With Russia, Not Against It 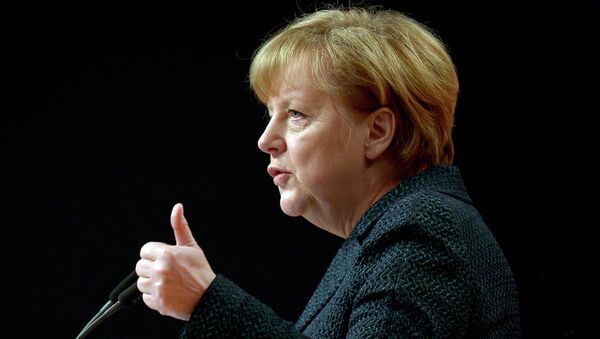 Speaking at the gathering of the ruling German CDU party, Chancellor Merkel said she wanted to "make peace in Europe with Russia, and not against Russia."

German TV Channel in Trouble After Being Caught in Ukraine War Lie
MOSCOW (Sputnik) — German Chancellor Angela Merkel has called for the restoration of peace with Russia at a party meeting in the northern city of Demmin, the North German Radio (NDR) station said.

Speaking at the gathering of the ruling CDU party late on Wednesday, Merkel said she wanted to "make peace in Europe with Russia, and not against Russia," as quoted by the radio.

But the chancellor added that Germany condemned violations of the integrity of European borders, in a remark that pointed to Crimea's decision last March to reunify with Russia.

Merkel Sees 'Beam of Hope' After Ukraine Reconciliation Talks in Minsk
Ties between the European Union and Russia soured after the start of the eastern Ukrainian conflict early last year, with the West accusing Moscow of providing local militia with military aid. Russia has repeatedly denied this claim.

Germany's ambassador to Russia Rudiger von Fritsch told RIA Novosti earlier in February that the EU-Russia standoff had led to a deep loss of trust between Moscow and Berlin. He stressed, however, that Germany was "truly interested in friendly relations with Russia."

The Ukrainian crisis prompted the 28-nation bloc to impose several rounds of individual and economic sanctions against Russia. Moscow responded last August with a one-year ban on food imports from the EU, as well as against other countries that introduced anti-Russia restrictions.

These bilateral curbs had a major setback for the Russian economy and those of its key EU trading partners, such as Germany, Bulgaria and Hungary.