Protests Over US Pasco Police Shooting of Immigrant Spill to Seattle 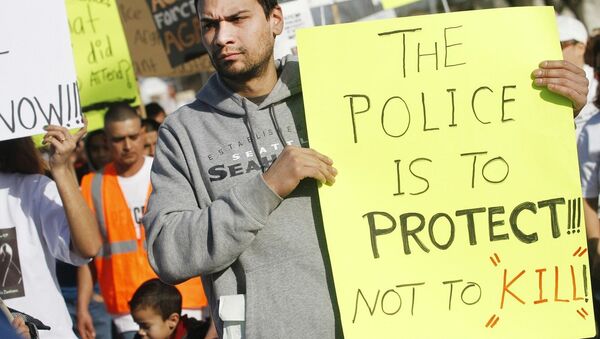 © East News / AP/FOTOLINK
Subscribe
Antonio Zambrano-Montes, 35, was shot dead on February 10 by Pasco police after allegedly throwing rocks at cars and, later, at officers. Video captured him running from police, his hands above his head, when he was shot eight times.

Protests Erupt in Washington State After Police Kill Man Throwing Rocks
MOSCOW (Sputnik) — Protests against last week's deadly shooting of a Mexican migrant worker in the city of Pasco, Washington, have spread to the state's largest city of Seattle where about 100 demonstrators took to the streets Wednesday night.

According to local Kiro 7 TV Channel, the protesters marched through the city's downtown area, causing minor traffic disruptions. The crowd chanted "We are all Antonio" and "Todos somos Antonio," the same motto in Spanish.

Demonstrators "die in" at Pine and 4th in #Seattle for Antonio Zambrano-Montes, killed by Pasco WA police pic.twitter.com/wpzbEWllt1

Look for us on the news!!! #Seattle #JusticeForAntonioZambranoMontes #Pasco pic.twitter.com/oB5RkRVTcK

Antonio Zambrano-Montes, 35, was shot dead on February 10 by Pasco police after allegedly throwing rocks at cars parked near a supermarket and, later, at officers. Video captured him running from police, his hands above his head, when he was shot eight times. The family of the deceased has filed a $25-million lawsuit against the city.

Coroner Considers Inquest in Fatal Police Shooting of Man Throwing Rocks
It was the fourth fatal police shooting in Pasco in the last six months.

On February 14, a 700-strong demonstration took place in Pasco, where Hispanics make up about a half of the population. According to the Seattle Times, the crowd, led by the Zambrano-Montes family, marched through the city center, holding posters calling to put an end to police brutality. The event's organizers said more protest demonstrations are to follow.

Police Shooting of Homeless Mexican Provokes Rally in Washington State
In 2014, Zambrano-Montes spent four and a half months in prison for hitting cars with a broom and attempting to harm police officers. When in custody he confessed to using methamphetamine, Newsweek magazine reported.

The killing of the Mexican national came on the heels of last year's police killings of unarmed blacks, Michael Brown in Ferguson and Eric Garner in New York. The deaths have sparked mass protests all over the United States.