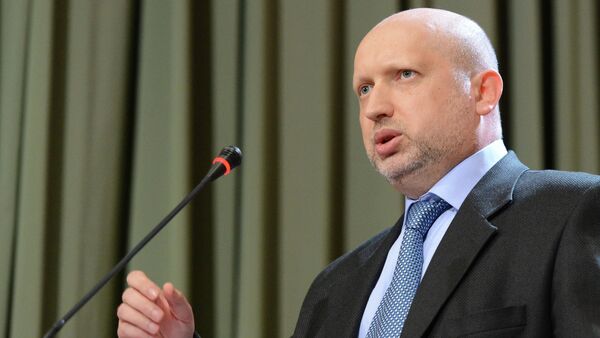 KIEV (Sputnik) – Ukraine's National Security and Defense Council decided to address the United Nations and the European Union on the deployment of police mission in Ukraine, the council's secretary, Oleksandr Turchynov, said Thursday.

"It was decided to address the UN and the EU on the matter of the peacekeeping mission in Ukraine. The Foreign Ministry will file a request," Turchynov said.

He expressed hope that the Ukrainian parliament, the Verkhovna Rada, would support the decision.

The secretary also said that a peacekeeping mission in Ukraine should be present at the line of contact and the Russian-Ukrainian border.

Poroshenko Says EU Police Mission Best Format of Int'l Presence for Ukraine
"[The peacekeepers] should be stationed along the line of contact, as well as along the uncontrolled part of the Russian-Ukrainian border… This will be a real step toward a peaceful settlement of the Ukrainian crisis," Oleksandr Turchynov said.

Ukraine has been torn by an armed conflict since April 2014, when Kiev launched a military operation in the country's southeast in an attempt to suppress the region's independence supporters.

A ceasefire agreement was reached in September 2014, but the warring sides failed to observe the truce, and the beginning of 2015 saw an upsurge in violence in Ukraine's southeast.

On February 12, the leaders of Russia, Ukraine, Germany and France hammered out a peace deal that was signed by envoys from Kiev, southeastern Ukraine, Moscow and the Organization for Security and Co-operation in Europe (OSCE). According to the OSCE, the ceasefire in Ukraine was generally holding.