Egypt Unlikely to Launch Ground Operation in Libya Against Islamists 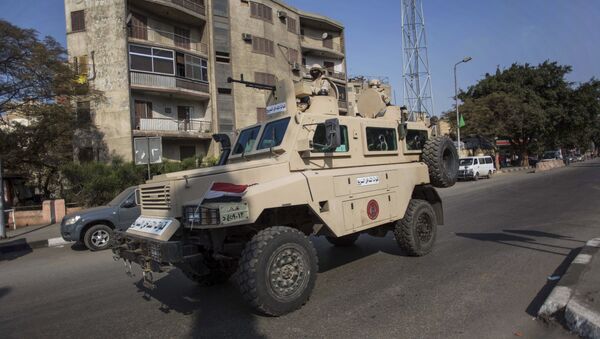 © AP Photo / Eman Helal
Subscribe
Analysts of Middle Eastern politics did not think that Egypt will launch a ground operation in Libya against terrorists affiliated with Islamic State.

A UN Security Council meeting on the situation in Libya is expected to take place later on Wednesday. On Tuesday, Egyptian President Abdel Fatah Sisi called for a UN Security Council resolution allowing for an international military coalition to intervene in Libya. This followed the killing of 21 Egyptian Coptic Christians, in retaliation for which, Egypt conducted a series of airstrikes on IS positions on Monday.

"I think Egypt will wait to see what happens at the UN Security Council meeting… A mandate would mean that they will have legitimate authorization for a wider intervention in Libya, which could include some ground incursions into Libya, but not a real occupation of the country… The Egyptian army would not want to do [it], because they are already busy with containing terrorism at home," Mattia Toaldo, an expert on Libya from the European Council on Foreign Relations, told Sputnik.

Cairo Reserves Right to Avenge ISIL Execution of 21 Egyptians - President
Moreover, Egypt does not have the capabilities to conduct a ground operation, according to Firas Abi Ali, head of Middle Eastern analysis for research firm IHS.

"Egypt is probably unable to commit to a major ground operation in Libya, given the cost and the logistical constraints. More likely is that Egypt will provide weapons and additional air cover to General Khalifa Haftar's [Libyan general leading the anti-Islamist alliance] forces," Firas Abi Ali told Sputnik in an e-mailed statement.

Commenting on the possible intervention of an international coalition, Toaldo noted that it may further aggravate the Libyan crisis and will not be effective unless a national unity government is formed in the country.

"Intervening now, without a national unity government, would be entering the Libyan civil war… They would withdraw very soon, because they would start suffering heavy casualties," Toaldo warned.

UN Refugee Agency Sees No Evidence ISIL Cross Into Europe
Leaders from France, Italy, Germany, Spain, the United Kingdom and the United States echoed this idea in a joint statement on Tuesday, ahead of the Security Council meeting. They called for a national unity government as the "best hope for Libyans to address the terrorist threat and to confront the violence."

The leaders of the six Western nations also condemned Monday's murder of Egyptian citizens in Libya by terrorists affiliated with Islamic State, which they claim underscored the urgent need for a political resolution to the conflict in Libya.

In early February, IS militants claimed responsibility for several attacks in Libya. In recent weeks, the extremists reportedly took over a Libyan state-run television station in Sirte, as well as two radio stations.

In 2011, a multinational coalition of NATO allies toppled Libyan leader Muammar Gaddafi. The operation was not UN-sanctioned and, while successful in ousting Gaddafi, led to chaos and turmoil across Libya.