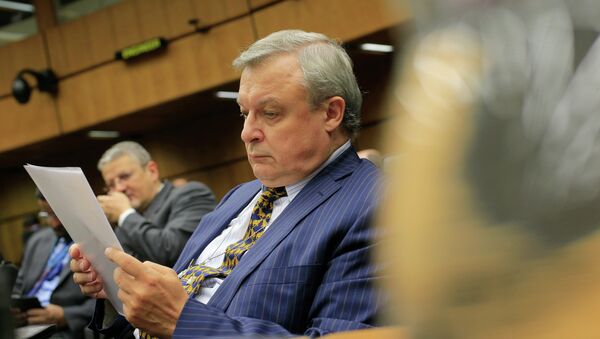 Russia's Ambassador-at-Large Grigory Berdennikov said that despite divergent positions on several issues, Moscow and Washington agree that the INF Treaty should become a multilateral agreement.

US Congressman Vows to Keep Pressure on Russia Over INF Treaty
MOSCOW (Sputnik) — Moscow does not consider it appropriate to review the Intermediate-Range Nuclear Forces Treaty (INF) with Washington – but would like more countries to join the treaty, Russia's Ambassador-at-Large Grigory Berdennikov said.

"The treaty has proven its viability," Berdennikov told RIA Novosti, adding that despite divergent positions on several issues, Moscow and Washington agree that the INF should become a multilateral agreement.

"Some states, that are still left out of practical work in this sphere, are very content with their position: no one exercises any serious pressure on them and they resort to the argument, well-accepted by the public, that they don't have to do anything because the United States and Russia possess the largest numbers of nuclear weaponry. This is wrong," the diplomat said.

Maintaining INF Treaty is Russian, US Interest
The INF Treaty, signed by the United States and the Soviet Union in 1987, bans nuclear and conventional ground-based cruise and ballistic missiles with a range of 500-5,500 kilometers (300-3,400 miles).

The Russian Foreign Ministry dismissed these accusations calling them groundless and noted that Moscow has a number of complaints of its own regarding Washington's compliance with the treaty.

In late January, Russian General Staff head Valery Gerasimov said that Moscow is concerned with US actions aimed at creating a global anti-missile defense system. According to Gerasimov, these actions are in breach of INF.