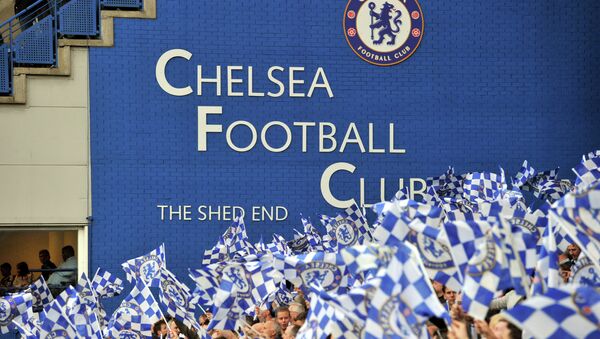 © AP Photo
Subscribe
Paris and London police have launched investigations into the behaviour of some football fans of London-based club Chelsea, after footage was released showing supporters singing a racist chant and stopping a black man from boarding a Paris metro train.

An investigation into alleged racial violence is to be taken up by Parisian officials, while Scotland Yard will assess video footage in the hope of identifying those involved.

The investigation follows the release of footage showing Chelsea supporters blocking a black man from entering the carriage of a Paris metro train and pushing him, before a larger group can be heard chanting "we're racist, we're racist and that's the way we like it."

The Chelsea fans were in Paris on Wednesday night to support their team, who was playing a Champion's League match against French side Paris Saint-Germain.

The inquiry is to be headed up by a police squad specialising in football hooliganism, with Paris police officials suggesting that those found guilty of racial violence could face three years in prison and a €45,000 (£33,000) fine.

Hard to believe anyone can act like that to another human. Hope they're all named, shamed and banned from football for life #chelsearacists

London police often travel with British fans to European football games to try and minimise any trouble on the commute, while a database of alleged troublemakers is also thought to be of assistance when identifying fans who are suspected of committing crimes while abroad.

Calls for Bans and Convictions

The video attracted widespread public condemnation after being posted online, with supporters, activists and football officials having their say.

Chelsea officials have confirmed they will work with authorities to determine who was responsible for the chants, and will ban anyone guilty of racist acts.

The club said in a statement:

"Such behaviour is abhorrent and has no place in football or society. We will support any criminal action against those involved, and should evidence point to involvement of Chelsea season-ticket holders or members the club will take the strongest possible action against them, including banning orders."

The English Football Association agreed with Chelsea's stance, releasing a statement saying that: "The FA, like the club [Chelsea], completely condemns such disgraceful behaviour which is a criminal offence and those responsible should face the strongest possible punishment."

Others, such as FIFA president Sepp Blatter also expressed his concern at the incident, while anti-racism activists have said they would support "any prosecution" following the release of the footage.

Re #chelsearacists In the spectrum of racism, I tend to find that there are varying degrees of ignorance. If you know better, you do better.

Lord Herman Ouseley, chair of anti-racism group Kick It Out said that the group would support any prosecution of those found guilty of racist activities. "I was shocked that Chelsea fans were still behaving like this. I thought the club had made it quite clear and taken action about stopping any repetition [of this behaviour]," he said.

"Anyone who can be identified, if they have an association with the club, the club said it will take the strongest action, which would include banning those people from going to Chelsea football matches.

"I would hope it would extend to banning them from going to any football match."