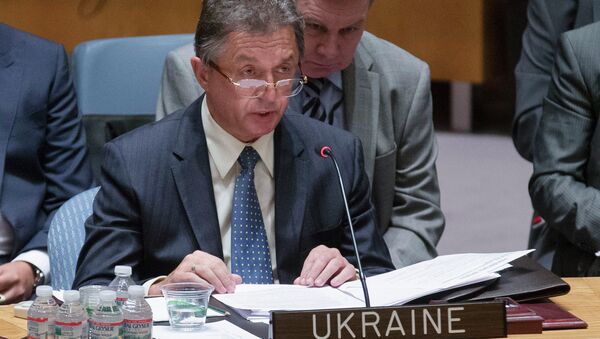 © AP Photo / John Minchillo
Subscribe
Ukraine's envoy to the United Nations claims that self-proclaimed people's republics of Donetsk and Luhansk in southeastern Ukraine are failing to abide by the Minsk Agreements.

UNITED NATIONS (Sputnik) – Ukraine's envoy to the United Nations Yuriy Sergeyev has claimed that militia of the self-proclaimed people's republics of Donetsk and Luhansk (DPR and LPR) in southeastern Ukraine (Donbas) are failing to abide by the Minsk Agreements.

Speaking to the UN Security Council on Tuesday, Sergeyev said that hopes for peace in Ukraine have been destroyed as the agreements signed in Minsk on February 12 are not being followed through.

"Unfortunately, despite hope from all the parties over the fulfillment of all the commitments, non-compliance with the agreements had ruined the prospect for peace," Sergeyev said, as cited in the UN Security Council's statement.

US Accuses Donbas Militia of Fuelling Violence, Admits Having Limited Data
The situation in the town of Debaltsevo, where Kiev forces are encircled by independence fighters, remains particularly tense, the envoy added, claiming that Donbas militia plan to attack the city of Kharkov after they destroy all the soldiers trapped in Debaltsevo.

Ukraine has been in the state of internal armed conflict since April 2014, when Kiev forces launched a military operation against independence supporters in the country's southeast.

A ceasefire was reached between the two sides in September but was not observed, and in early 2015 hostilities in Ukraine's southeast intensified, with Debaltsevo being one of the hotspots.

The most recent ceasefire deal was agreed on February 12 following 16-hour talks held by the leaders of Russia, Ukraine, France and Germany in the Belarusian capital, Minsk. The ceasefire came into force on February 15. Truce violations have been reported but the Organization for Security and Co-operation in Europe (OSCE) said the ceasefire was generally holding.